Say “Yes” to Science-Based Standards and “No” to Anti-GMO

The U.S. House of Representatives last Thursday (July 23) passed the Safe and Accurate Food Labeling Act with bi-partisan support. While this is great news for the seed industry, I’m concerned by the amount of misleading social media chatter and general “noise” this passage has created. I’m also concerned with headlines like “House Passes Anti-GMO Labeling Law.” 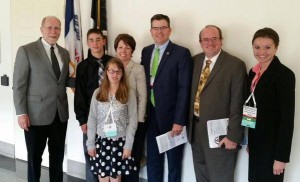 U.S. Congressman Dave Loebsack (pictured at left) met in June with representatives of the American Seed Trade Association (ASTA) on issues including pollinator health and the GMO-labeling bill. John and Shannon Latham (pictured in the center) were part of the grassroots lobbying delegation. All four of Iowa’s representatives voted in favor of HR 1599, which standardizes food labels nationwide.

A headline of “House Supports Science-Based Labeling Standards” is more accurate, but I realize that not nearly as likely to draw in a reader. Since I have editorial control over TheFieldPosition, I’m going to take a few minutes and explain why Latham Hi-Tech Seeds owners joined a group of representatives from the American Seed Trade Association last month to visit Capitol Hill in Washington, D.C. The ASTA is one of nearly 500 organizations that sent a letter to Congress in support of H.R. 1599.

During in-person visits, we asked our elected officials to support H.R. 1599 because:

“The bill isn’t about “simply preempting states’ rights” to label foods containing GMO’s,” as agvocate Ryan Goodman wrote July 24 on his I Am Agriculture Proud Facebook page. “HR 1599 creates consistency for a national food system and leads to a USDA-led certification for voluntary labeling, which should make label claims more consistent (see Section 291A – “The Secretary shall establish a voluntary genetically engineered food certification program…”)

If someone really wants to avoid GMO ingredients, they can use the Organic certification system that’s already in place. “Don’t force a mandatory system on the entire population when there are already tools available for use,” says Goodman. Touché!

We already have systems in place for people who prefer to have their food produced in a specific manner. So why add costly, burdensome and confusing mandatory regulations to the silent majority?

Attention now turns to the Senate where we expect a similar bill to be introduced this fall. You can bet we’ll be contacting our U.S. Senators, asking them to support uniform federal labeling standards. Stay tuned for TheFieldPosition to see what develops!

In the meantime, please do what you can to help consumers understand why farmers plant GMO seeds. The Peterson Brothers have done a good job explaining what GMOs are and are not; click on this link to Advocate for the [GMO] Truth.