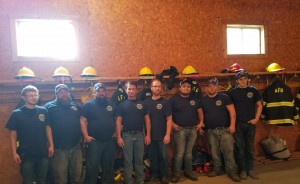 Those of us who live and work in rural American often rely on local volunteers like those at the Alexander Volunteer Fire Department. Alexander, Iowa, is the home of Latham Hi-Tech Seeds, and we’re proud that so many of our employees feel called to serve.

Quentin, who has served as a fireman for 11 years and is currently fire chief, is following in his father’s footsteps.

“My dad was on the fire department and so I was always around it when I was younger,” he says. “Then after all the events that happened on September 11, I was inspired to get involved.”

Brad, who is in his third year of volunteer service, says, “I chose to get involved to help people and contribute to the community. I wanted to make sure that everyone stays safe here.”

Quentin and Brad have both been through extensive training to become certified firefighters. Training spans over four months and contains a variety of training methods, including classroom-style presentations and live fire exercises. Topics cover fire science, safety procedures, rescue techniques and proper use of protective equipment.

There are nine volunteer firefighters on the Alexander department, which is a solid crew considering the town’s population was 175 in the 2010 census. The department made a strong effort to recruit volunteers after a fire occurred in Alexander and a crew from a neighboring town had to come put out the fire. Response time lagged, so concerned citizens like Quentin and Brad answered the call.

“After that happened, we knew we needed to do something different,” said Brad. “We needed to protect what we have and not rely on other communities for our safety.”

The Alexander Fire Department also has been actively raising funds for new equipment. Each spring and fall, they hold a meal and invite community members to attend for a free-will donation. Their largest meal to date served close to 180 people and the raised over $3,000! Latham Hi-Tech Seeds donated a print for a drawing give-away at the fall event and also provided the plates, napkins and silverware.

The fire department has also raised money through generous donors in the Alexander area. Latham Seeds gave a donation that went toward purchasing Grain Rescue Tubes, which allow the fire crew to safely rescue individuals from grain entrapments.

While the grains tubes are helpful, most of the funds raised by the Alexander Fire Department are going toward a new fire truck. They have raised more than $75,000 to fund this purchase. The truck is being built and should arrive later this spring.

We are lucky to have such dedicated workers on staff at Latham Seeds. Volunteers like Quentin and Brad, as well as Dave Craighton who serves on the Dows Fire Department, are committed to their communities. We know there are similar stories throughout rural America. If you’d like to nominate someone on your local fire department or EMS crew to be nominated for a feature story on TheFieldPosiiton.com, call the Latham office at 1-877-GO-LATHAM!