They had never before planted Latham® Hi-Tech Seeds but that didn’t prevent Mike and Patty Bergquist of Foxhome, Minnesota, from taking on a dealership when asked. 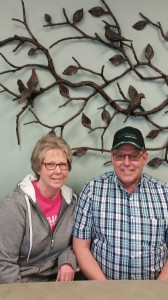 “We were looking for a way to bring our son, David, home and this ‘solution’ seemed to present itself,” said Mike. “You might say opportunity knocked when your sales manager came to our door that day and talked with us about Latham Seeds.”

They weren’t able to get the soybean brand they were accustomed to planting, so the Bergquists decided to try Latham Hi-Tech Soybeans. They also put Latham® corn to the test, and Latham Hi-Tech Hybrids topped their on-farm yield test. He was sold on the Latham performance!

No one in their area had a Latham® dealership, so Mike said his family liked the idea of offering something others didn’t have. He said that national companies have several dealers in the area, but he really liked the idea of working with a family-owned company that shares similar values.

Mike served for three years in the U.S. Navy and then returned home and helped his step-grandfather, Harold, farm. To supplement his income, Mike started working campaigns in 1975 at the local sugar beet processing plant. He worked at the plant whenever Harold didn’t need him in the field.

When Mike and his wife, Patty, were married in 1977, Harold offered to let them move a trailer house onto the farm. They appreciated that opportunity to live on the farm where they could begin a family. Four years later their first child was born, and Mike had to choose between accepting a promotion at the beet plant or farming full time with Harold. He chose farming, but it wasn’t long before their situation changed.

Harold passed away in 1985. The 1980s Farm Crisis made it challenging for a young couple to support a growing family, so in 1988, this father of five went back to working campaigns at the beet plant. Mike accepted a full time position there in 1989, and today he serves as a plant supervisor. Because Mike only get weekends off once every four years, it helps to have David involved with the farming operation.

David, the Bergquist’s youngest child and only son, completed the John Deere program at North Dakota State College of Science (NDSCS) in Wahpeton. He has been at RDO Equipment for two years as a John Deere technician. He’s been dating Chloe Bergman since they were freshman in high school, and she’s studying to become a dental hygienist.

Their oldest daughter, Kari, and her husband, Tim Marquardt, have 3 kids. Their son Hunter is 8 and Hudson is 4. Their daughter Hadley is 6. Kari works as a school cook and Tim works at the co-op. Their daughter Heidi has two fur babies: Harley is a Black Lab and Buster is a mix that she rescued. She works as house manager for West Central Community Services.

Third in birth order is Katie. She is a daycare provider and her husband, Derrick Wolter, is an engineer for Willrich. They’re the proud parents of two sons, 3-year-old Dawson and 8-month-old Carsten.

Daughter Holly is a nanny. Her husband, Travis Rogahn, is a John Deere technician plus he farms. They have two son, 4-year-old Michael and 6-month-old Bennett. 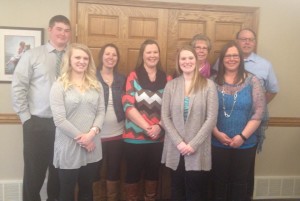 In their free time, the Bergquist family enjoys camping. It’s something they enjoyed doing when their kids were young. Now it’s something the three generations enjoy doing together.

When everyone gets together for camping, Patty keeps the menu simple. A family favorite is Tequilaberry Salad, which she’s sharing with us today.