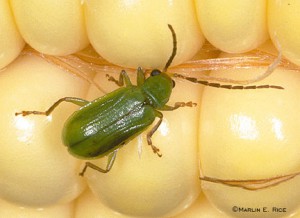 Blackcutworm moths migrate from the south in the spring and the moths lay eggs in grassy and broad-leaf weeds. Data from moth flight monitoring traps suggests that cutting activity from black cutworms might be noticeable around May 28 in northeast and north central Iowa.

Scout now for black cutworm, and be a vigilant scout from the time corn plants emerge until plants reach the 6-leaf stage.Newly hatched larvae will chew small, irregular holes in corn leaves. While this early injury does not damage plants significantly, it should be used as an early warning of possible black cutworm infestations. As larvae grow, they are capable of cutting the stems and stalks of corn plants and significantly reducing the stands.

Look for plants with wilting, leaf discoloration and damage, and those that are either missing or are cut off at the soil surface. Note areas with suspected damage and return later to assess further damage. A rescue treatment approach is the best strategy for dealing with this pest.

Another pest of concern is corn rootworm, which has earned the nickname the “billion-dollar bug.” The U.S. Department of Agriculture (USDA) estimates damage caused by this pest and costs associated with controlling it typically total $1 billion annually!