Continued use of the same rootworm-resistant trait in corn hybrids, an increase of corn-on-corn areas, plus a lack of refuge acres, has caused rootworm resistance to become an issue in some areas.  Best management practices, including rotation, are key to effectively controlling corn rootworm populations. 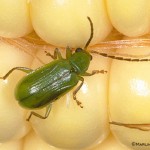 However, rotation isn’t as simple as it used to be.  Farmers can no longer merely rotate between corn and soybeans as the only effective management strategy.  Both the Northern Corn Rootworm and the Western Corn Rootworm have developed methods to counteract the effects of rotation on their life cycles.  The Northern species uses a tactic called Extended Diapause that allows its eggs to lay dormant during the time fields are in soybeans.  The eggs will then hatch after the field is planted to corn, and the young worms will feed on the corn roots.  Adult females of the Western species have actually learned to lay their eggs in soybean fields, thereby allowing them to hatch the following spring when the field is planted to corn.  With these changes in what used to be considered the “normal” life cycles of rootworms, managing CRW today requires increased diligence. 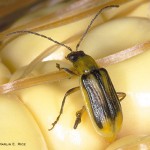 Rotating rootworm-resistance traits developed by Monsanto, Syngenta and Dow will help CRW resistance from developing if farmers actually rotate modes of action.  One advantage of working with family-owned and independent Latham Hi-Tech Seeds is that we can help you select the trait packages needed to change up your modes of action.  Latham offers the industry’s broadest, deepest seed lineup – which makes it more convenient for farmers to get all their seed needs met.

Using hybrids with more than one rootworm trait like Genuity® SmartStax® may offer another line of defense against CRW.  The recent approval of Agrisure Duracade from Syngenta provides another trait in the arsenal to fight CRW; hybrids with Agrisure Duracade are expected to be commercially available in 2014.

Additionally, refuge acres must be planted.  Refuge-In-the-Bag (RIB) hybrids available from Latham Hi-Tech Seeds make compliance simple. Respect the refuge® and it will greatly increase our likelihood of keeping rootworm traits viable for years to come.  Rotation helps reduce the risk of resistance.  However, planting refuge alone is not enough.

Corn rootworm management is a complex issue and the solution is more than just traits.  There are many factors and management options that must be considered: