Recent studies* across the North Central Region of the U.S. have uncovered some disturbing results in the field of seedling pathogens, specifically Pythium and Fusarium.  Most farmers and many crop consultants have considered each of these to be a singular disease with common characteristics, but new research completely dispels such theories. 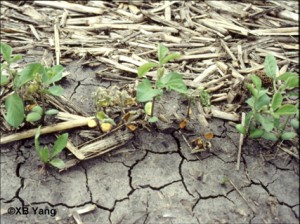 Photo credited to the ISU Extension. Click for original photo

In Iowa alone, approximately 20 species of Pythium were identified in diseased seedlings and more than 50 were recovered across the entire North Region! At least 12 different species of Fusarium were identified across the North Central Region. Many of these species were able to infect both soybean and corn crops, which means that crop rotation might not be an effective management tool.

Another area of concern is the temperatures in which these pathogens do the worst damage. For many years, Pythium was considered a disease that flourished in a cool, damp environment. New research by Iowa State and Michigan State Universities shows that some species actually favor warmer soil temperatures. In addition, changes in the environment from one year to the next can cause different species of pathogens to become more prolific in different years.

The use of seed treatments appears to be the best management tool that farmers can use against these diseases, but a more integrated approach might be necessary to prevent severe infestations. Typically, the industry has used the metalaxyl compounds (e.g. Apron, Allegiance, etc.) almost exclusively against Pythium and included a blend of other fungicides to help control Fusarium, Rhizoctonia and seedling Phytophthora. In the future, expect to see other components being added to these blends to help or replace the metalaxyl.

At Latham Hi-Tech Seeds, we are testing different fungicide components in our 2014 research trials to see which of these new compounds will be the most beneficial for our customers. We’re always striving to provide the very best in soybean seed treatments to place under the SoyShieldTM and SoyShield Plus brands.

*Funding for this ongoing research was provided by USDA-NIFA, the United Soybean Board, the North Central Soybean Research Program and the Iowa Soybean Association.