Today is the 100th birthday of Norman Borlaug, an Iowa farm boy who went on to father the Green Revolution. How fitting that this momentous occasion coincides with National Ag Day on March 25!

How fitting that also today a statue of this pioneering Iowan will be dedicated in Washington, D.C., where it will inspire lawmakers and visitors alike for the next 100 years or so. The 7-foot bronze likeness of Borlaug will be one of two statues representing Iowa in the National Statuary Hall. To help put the magnitude of today’s event into perspective, note that statues of Civil War-era Statesmen Samuel Kirkwood and James Harlan have represented Iowa in the U.S. Capitol for more than 100 years. Borlaug’s statue will replace one of James Harlan, secretary of the interior under President Andrew Johnson.

“Feeding the world” is Dr. Norman Borlaug’s legacy as he is known as the man that saved a billion people worldwide from starvation.  He spent his life’s work developing grain varieties that would help farmers in mostly lesser developed countries like India and Mexico produce more food.

“My grandfather focused on talking to, training, and investing in the young scientists, researchers and farmers,” says Julie Borlaug, associate director of external relations at the Borlaug Institute. “His guiding philosophy was ‘take it to the farmer’ and he truly believed everything started by going to the field.”

Dr. Borlaug realized the importance of encouraging other researchers and scientists to share their findings with farmers, who could benefit from it. That’s why the Borlaug International Scholars Fund, international field internships, and the World Food Prize Global Youth Institute help inspire and finance the next generation of people who will make great contributions to feed the world’s people. 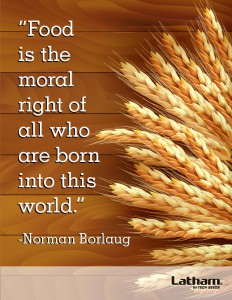 When asked what her grandfather would think about all the “food fights” today, Julie Borlaug acknowledges that GMO PR falls short. She is quoted in a March 21 Des Moines Register article as saying, “He would be angry … (about) this anti-GMO, anti-big ag, anti-technology (movement). And how there seems to be so much ignorance and so much of a backslide of where people think we should be going.”

Isn’t it ironic that well-fed people try to dictate how food is raised across the globe? People with full bellies are trying to tell farmers and ranchers how to grow food. Scare tactics and fear mongering –powerful emotions – limit biotechnology and the very technology that Dr. Borlaug proves can help save lives.

Isn’t ironic that well-fed people in developed nations want to “say ‘no’ to starving people” who could benefit from increased yields and large foods supplies provided by seeds with built-in resistance to insects, disease, weeds and even drought? But don’t just take my word for it. Take it from a Zambia native who says, “Protesting GMOs condemns millions to poverty.”

Growing food around the world can vary drastically. What grows on my farm, with my technology, may not grow sustainably in a neighboring state. It’s hard to understand what seed technology works on the far side of the world, but Dr. Borlaug understood this. He developed wheat that could withstand pests to feed hungry people.

Believe it or not, many people and companies still have this goal in mind! Yes, a profit needs to be made but profit is not the root of evil. After all, no practice is sustainable if you can’t afford to keep doing it! Profit can be a huge motivator, just like eliminating hunger motivated Dr. Borlaug.

Please join me this National Ag Week by putting behind us the silly arguments that prevent safe and proven technology from feeding the world. Buy what you think are the best products for your family, but allow the same right to all other families!