One advantage a rural school has is acres for learning. CAL’s Go Green Learning Garden was established 2017 in Latimer, Iowa, as part of the Farm to School program for elementary students.  After nine months of planning and constructing buildings, a school farm was added.

“Our Children’s Acres for Learning, or CAL School Farm, is something that we are very proud of and our students are excited about what they can learn from the farm,” says Steve Lane, who served as superintendent of C-A-L, a public school for the communities of Coulter, Alexander and Latimer. CAL Middle School and High School became shared as part of the Hampton-Dumont School District (H-D CAL) beginning in 2018. 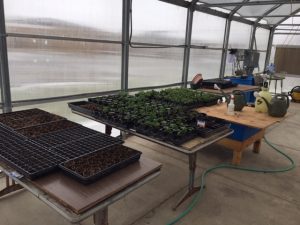 The Go Green Learning Garden is comprised of five raised garden beds in which radishes, onions, tomatoes, zucchinis, peppers, potatoes and strawberries are grown. Vined plants need room to spread, so this spring CAL will till a new land garden for potatoes, tomatoes and vine plants such as zucchini, cucumbers and squash. In addition, the greenhouse has been renovated recently. The plan is to sell plants and flower arrangements in May, just in time for Mother’s Day.

“School Board Member Cathy Carlson attended the Iowa Association of School Boards Annual Convention in November 2017 where she listened to a presentation by students from Hamburg Community School, who had begun a school farm on their property,” explains Mr. Lane. “We believed our students had the capability to construct farm buildings and be involved in operating a farm similar to Hamburg’s. We also felt that we needed to educate our students as to where their food comes from, and that a hands-on approach would be the best way for students to learn about agriculture and the food chain.”

Mr. Dave Harms, who taught at H-D High School and also worked as a Building Trades instructor for North Iowa Area Community College (NIACC), designed several farm buildings. He presented three different roof designs and each of our buildings have a different roof design. In early October 2018, Mr. Harms and Mr. Lane supervised elementary students from CAL to begin building the hog barn. It was finished just prior to Christmas break. Shortly after break, they began building the chicken coop and finished it in March. 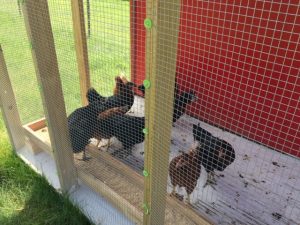 Chickens were added to the farm in early July 2019. The 12 pullets began laying eggs in August about the time the students started back to school. Other animals that make their home on the CAL farm include pygmy goats named Blizzard and Chip, a.k.a. Chocolate Chip, which the students named after ice cream flavors. Two pigs also were raised. The pork was processed Nov. 19, 2019, by LeWright Meats of Eagle Grove and the entire student body recently were served ham for school lunch.

Students learn where their food comes from because it’s served on their plates and taught in both the indoor and outdoor classroom. 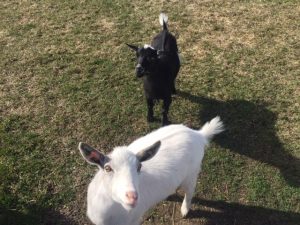 “Teachers plan lessons around what students learn at the farm in the way of Math, Reading, Science and Social Studies and even Art and Music,” says Mr. Lane. “Students sign up by the week to help with chores at 8 A.M., after lunch, and then again at 2:45 P.M. Each group consists of four or five students, who help with chores and gathering the eggs. Teachers also bring their classes to the farm when it is possible. All grades from 3-year-old pre-school to sixth grade have been learning about the farm.”

Mr. Lane would like to acknowledge the following for making the CAL school possible: the CAL Board of Education; Forest and Evelyn Barkema Charitable Trust; Ag Venture Alliance; Lohrback Insurance; Olive Avenue Feed, LLC.; Hampton Veterinary Clinic; DeBour Electric; Niman Ranch (Delbert Hamilton); North Iowa Food Coalition; Val Plagge for the CAL Facebook Page; Roy Plagge, Donna Tidman (who donated the goats) and many others who have given us support and encouragement throughout the past year.

To support the school garden, stay tuned to local Franklin County news for more information about how you can purchase plants and greenhouse items from the CAL Go Green Learning Garden.  Today we’re sharing with you a recipe for zucchini bread because in 2017 students got to turn the zucchini they grew into bread.

NOTE: If you’re using frozen zucchini, thaw it first and drain the juices.