Pressure on the Rise from Insects & Disease 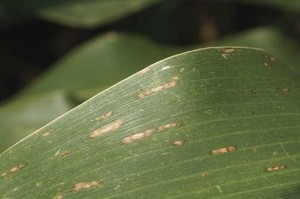 Corn diseases will likely be more prevalent this season due to an excessively wet spring followed by humid summer weather.  Plentiful moisture or dew is ideal for most fungal corn diseases.  Watch for Gray Leaf Spot, Southern and Common Rust, Northern & Southern Leaf Blight and Eyespot.

Later planted crops can get stressed more easily, which also makes them more prone to insect pressure.  It’s likely we’ll see different insect and disease pressure now than we typically would because our corn is not as far along in its development as it would be in late July. 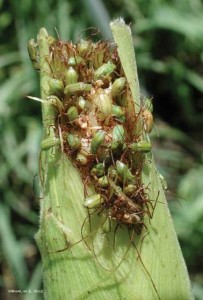 Corn rootworm are strongly attracted to corn during pollination and can trim back silks to the husk. Photo by Marlin E. Rice.

Take good field notes to help you select the right seed for the future.  For example, fields with confirmed Goss’s Wilt should be planted to a hybrid that is more resistant to Goss’s wilt in subsequent years.  Tillage and crop rotation can also help reduce corn rootworm.  Tillage and crop rotation also can help reduce the amount of residue that can harbor bacteria for the next corn crop.  For additional information about managing disease or insects, click on the related links below.