Scout All Fields for Corn Rootworm

With most of the 2013 crop in the ground, it’s time to walk fields.  Crops should be scouted within 3 to 5 days of planting and then regularly throughout the growing season.  Be on the lookout for: (1) crop emergence; (2) nitrate leaching and (3) insect and disease pressure

When checking fields where the corn is more developed, look for signs of nitrogen loss.  Iowa State University Nutrient Management Specialist John Sawyer says the best options for sidedressing, in order from most to least preferable, include: 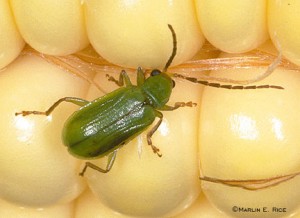 Also walk every field for signs of corn rootworm (CRW), regardless of what traits they planted.  The corn rootworm hatch is underway, so larvae will soon begin feeding on roots if they aren’t already doing so.  Corn development, although delayed, still provides plenty of plant material for the CRW larvae to feast upon. Severe infestation can destroy nodes 4-6, which effect water and nutrient uptake.

Because of the wide variance in planting dates this year, rootworm beetles can move between fields in search of the best “buffet.”  A late maturing corn field may attract a large numbers of beetles if neighboring corn stopped producing pollen, for example.  Beetles may also move into corn and/or soybean fields that have an abundance of pollen-producing weeds, including volunteer corn, ragweed or foxtails.