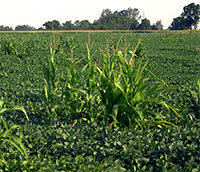 Would you wait for weeds to get 3 feet tall before treating them? Volunteer corn is an increasing common weed! Photo credits to Purdue University.

Volunteer corn is not a crop… it’s a weed that grows from grain left in fields after a harvest.  Farmers should treat volunteer corn like a weed and manage it early in the season.

Three main reasons why volunteer corn should be managed early:

Another reason volunteer corn is a concern is because it creates a “safe harbor” for corn rootworms.  Corn rootworm typically hasn’t been a problem when fields are rotated annually between corn and soybeans because soybeans starve out rootworms that hatch in spring.  However, volunteer corn allows rootworm larvae to complete their feeding cycles.

In addition to being a food source for rootworm larvae, volunteer corn that is not controlled by tasseling attracts corn rootworm beetles for egg laying.  The beetles lay their eggs in the soil around the base of the volunteer corn.  The eggs will remain dormant until they hatch the next spring.

Bottom line:  Higher numbers of volunteer corn can build higher corn rootworm populations for the next growing season.  Higher rootworm numbers are especially problematic when those fields are planted to corn the following year in a corn-soybean rotation or in continuous corn.