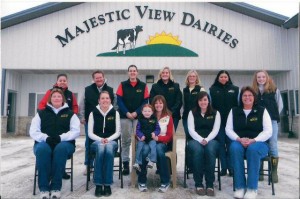 Families come in all shapes, sizes and colors.  And so do family-owned dairy operations.

Last Friday we introduced you to Sarah Mumm, who milks 50 registered Holstein dairy cows herself on her family farm in Grant County Wisconsin.  Her husband, Joe, works seasonally at Majestic View Dairy LLC.  Today we’re going to introduce you to the family behind Majestic View Dairy, a 1,000-cow dairy on the outskirts of Lancaster.

Majestic View Dairy got its start, albeit unknowingly at the time, in 1939 when Carol and Foster Haskins purchased farmland.  John Haskins, a co-owner of Majestic View Diary, purchased 290 of those acres from his mother in 1959.  John purchased another 140 acres in 1983, and soon thereafter, Ron and Terri Abing started a 50/50 partnership with him.  In 1999, they formed an LLC and expanded to 600 cows.  Then in 2003, they expanded another barn to accommodate 1,000 cows. 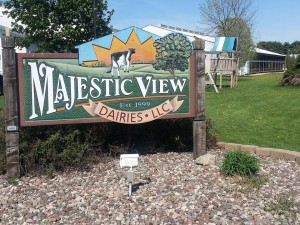 One evening in 1999, as the Abing family watched the sun set in front of the dairy being constructed, Jesse said, “Isn’t that a majestic view?”

Building the dairy made a big impression on the Abings’ children: son Jesse was 18 at the time; oldest daughter Sarah was 14 and Amanda was 10.  They were fascinated by all of the computers and high-tech equipment that was being installed to run the dairy operation.  The children learned the value of working hard and working together.  Jesse majored in Spanish at Luther College in Decorah, Iowa.  He then taught high school Spanish for five years before returning to graduate school.  He earned a master’s degree and is now pursuing a PhD in Spanish Linguistics at the University of Texas.  Meanwhile, both of the Abings’ daughters were interested in dairying.  Sarah graduated from Southwest Technical School in Dairy Herd Management.  Amanda graduated from Lake Shore Technical School in Dairy Herd Management.

Amanda, the Abings youngest daughter, became a herd manager when she was just 19.  She now works at Highway Dairy near Darlington, where she lives with her husband and their 7-month-old son Jacob.

The Abings’ daughter, Sarah, has served as herd manager for Majestic View Dairy since 2008.  Her husband, Buck Johnsen, also works at the dairy, breeding cattle and helping with agronomy work.  Their four-year-old daughter, Amelia, loves to help her mom and Grandma Terri give tours to school children and other interested folks.  Sarah and Buck are also proud parents of 5-month-old son, Easton. 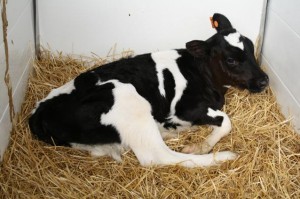 In 2003 and in 2005, Majestic Dairy built two calf barns. Each barn, consisting of BSM Comfy Calf Suites, can accommodate 66 calves.

Ron’s brother Chuck is the heifer operations manager. Four of Terri and Ron’s nephews and nieces also work on the farm:  Brandon Klien, Crystal and Kyle Abing, and Jake Martin.  Other key employees are Aaron Knapp, who maintains machinery and works with the hay, and calf manager Sara Recker, who has worked at Majestic View Dairy since it was formed.

Sara and the calves are a hit when school children visit the dairy.  More than 4,000 children have visited Majestic View Dairy since Terri started giving tours about seven years ago.

“Although it takes a lot of time to prepare for those groups, it’s so worth it,” says Terri, whose passion is helping people understand how their dairy products are made.  The two-hour tour gives children and their adult chaperones an overview of the milking process, as well as the behind-the-scenes that goes into caring for the cattle.  They see the maternity pens, where cows take a two-month maternity leave before returning to the milk line, and the hospital barn, where special needs are met to return cows to good health.

“I especially like the one-on-one conversations that occur with these groups,” says Terri.  “We like to help answer questions they might have about our operation or why we do things a particular way.  We also share fun facts like this one,’ It takes a baby about 1 year from the time it’s born until it takes its first steps.  About an hour after it’s born, a calf takes its first steps’.”  The tour concludes with a dairy buffet, including several varieties of cheese, assorted flavors of milk and portable yogurts.

Majestic View Dairy employs a total 28 people, consisting of 14 part-time and 14 full-time positions.  Many of the part-timers are high school and college students, who come to work after class.

“It’s really rewarding to see the growth that happens as these kids work at the dairy,” says Ron.  “They learn the importance of showing up on time and giving it your all during your shift.  Even if they don’t choose to pursue one of the 300 different career opportunities available with dairy, they’re developing skills that will help them in any job they pursue.

As proud supports of the dairy industry, the Abings invite you to road trip to Wisconsin in June during the Dairy Days of Summer.  You can enjoy Breakfast on the Farm or participate in numerous other fun events from Cheese Curd Day to Ice Cream Weekend.

Enjoy the fresh tastes of dairy foods from the comfort of your own home, too.  Whet your appetite with starters like June Chili and Chilled Raspberry Yogurt Soup, or cool off with a sweet treat like a Tiramisu Smoothie and Rhubarb Cheese Pie.

Please excuse me now while I go search from some rhubarb…