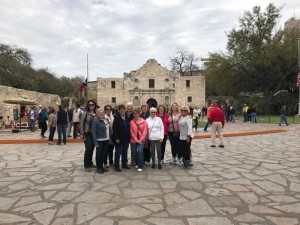 Everything is bigger in Texas, and from what I witnessed in San Antonio, that saying holds true from local legends and lore to food and attractions.

Last week I was one of about 9,000 people who had the chance to “farmer up” during the 2017 Commodity Classic, which is America’s largest farmer-led and farmer-focused convention and tradeshow. My Facebook feed was filled with fabulous sights including: 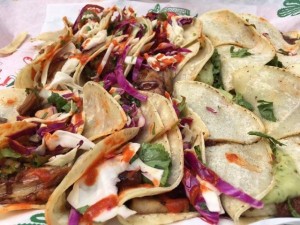 One of my favorite ways to see a city is through a walking tour, and I never turn down an opportunity to sample local foods. When I heard a group of ladies from Iowa was embarking on a walking food tour, I couldn’t wait to join them! (Special thanks to Carol Coleman for organizing this wonderful outing.)

Mexican, European and Western cultures have melded together to create a unique urban culture, as well as unique cultural cuisine. Although it’s famous for Tex-Mex, San Antonio is gaining attention as America’s next big culinary destination.

“From notable restaurants to the Culinary Institute of America, there’s something to satiate every palate,” states the San Antonio vacation guide. Much of the city’s unforgettable landscape has grown along the banks of the River Walk where stone paths run aside the San Antonio River, connecting hotels, restaurants, shops and the Henry B. Gonzalez Convention Center. The River Walk was recently expanded to link even more attractions including museums, Spanish colonial missions and the Pearl, a former brewery reborn into an eclectic mix of shops, restaurants and entertainment.

Keeping with the eclectic flair, last Saturday got off to a “hot and spicy start” when Darcy and I attended an early morning cooking demonstration by Corporate Chef Mark Patel. His Indian and German heritage fueled his passion for rich ethnic cuisines. As he and his wife travel, Chef Patel works to incorporate wonderful culinary experiences into his recipes. He demonstrated three wonderful Asian-inspired dishes featuring chicken and high oelic soybean oil. Hope you enjoy his recipe that we’re sharing today for Zingy Fried Chicken Steak with honey lemon dipping sauce!

To prepare the chicken:

5.      Place cooked chicken thighs on plate with paper towels and let rest for 3-5 minutes; then cut thighs into 5 or 6 slices.

4.      Keep warm and stir in lemon juice right before serving.