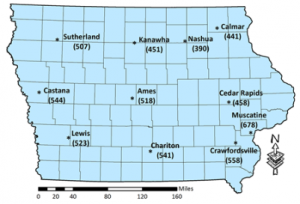 Although corn is not as far along in its development as it normally is at this time of year, there is still plenty of plant material available to provide a feast for the CRW larvae.  It won’t be long before newly hatched larvae begin feeding on corn roots.  Severe infestation can destroy nodes 4-6, which effect water and nutrient uptake.

Shortly after larvae begin feeding on roots, adult beetles begin to emerge from fields and begin feeding on pollen, green silks and leaves. The males emerge first, and the females follow about 5 to 7 days later.  Mating takes place, and then females will lay eggs toward the end of July through August.

Because of the wide variance in planting dates this year, it will be important to inspect every field – regardless of seed selection.  Rootworm beetles can move between fields in search of the best “buffet.”  A late maturing corn field may attract a large numbers of beetles if neighboring corn stopped producing pollen, for example.  Beetles may also move into corn and/or soybean fields which have an abundance of pollen-producing weeds, including volunteer corn, ragweed or foxtails.

Field notes from 2013 will help you select seed products for 2014.  To prevent corn rootworm damage from reaching such devastating levels, plant a portfolio of products.  Remember, that in 2104 Latham® Hi-Tech Hybrids, will offer Agrisure DuracadeTM as another option in the fight against corn rootworm.