Each year on March 22 the United Nations’ (UN) World Water Day is held to increase people’s awareness of water’s importance in environment, agriculture, health and trade.

Farmers are always aware of the crucial water plays in crop development, and after experiencing the 2012 Drought, we really don’t need to be reminded how a lack of water can impeded crop development.  World Water Day, however, does provide us with a platform to share our story with others outside agriculture. 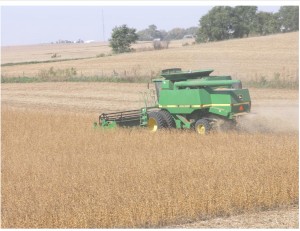 “My farm received a total of 5 inches of rain between May and October 2012.  Normal annual rainfall is 23 inches, so we’re starting the 2013 growing season with a moisture shortfall,” said April Hemmes, who is speaking today in Washington, D.C., as part of a panel discussion sponsored by the Daugherty Water for Food Institute and the Global Harvest Initiative.  Other panelists include:  Dr. Cathie Woteki, USDA Under Secretary for Research, Education, and Economics; Mark Svoboda, National Drought Mitigation Center Climatologist, University of Nebraska-Lincoln; and Joel Lipsitch, John Deere Director of Business Integration and Strategy;

Soybean yields averaged 6 bushels per acre (bu/A) lower in 2012 for Hemmes, who has farmed for nearly 30 years just south of Hampton in Franklin County, Iowa.  Her corn yields were reduced by 10 percent, or approximately a net loss of $70 per acre.  When you consider that the average size of an Iowa farm is 333 acres, it’s feasible that each Iowa farm family lost between $11,000 and $23,000 of income due to the 2012 Drought!

“It scares me to think we’re going into the 2013 crop year with almost nothing for moisture,” says Hemmes.  “Moisture is especially important to farmers in my area because we don’t irrigate.  As much as I dislike late season snowfall, I’m thankful for it this year because now we will at least have topsoil moisture to get the crop planted.  If we don’t receive adequate spring rains, however, young plants will suffer more quickly due to a lack of subsoil moisture.”

To help preserve soil moisture last fall, many experts were reminding famers to till less for more water.  Seed selection is even more critical in dry conditions as genetics are the most determining factor in whether or not a corn hybrid can handle drought.  While corn genetics have come a long way over the past decade and are much better at handling drought stress than ever, soybeans historically perform even better in dry weather.

Current weather patterns are likely to play a role in farmers who have yet to finalize their 2013 seed purchases.  Trait packages will likely be especially important this growing season as the 2012 Drought might impact 2013 crops in regard to pressure from weeds, insects and plant disease.  Once the seed is selected, and planters have been calibrated, Iowa State University Corn Specialist Roger Elmore says farmers must go “back to the basics” for seeding depth.