“Divide and Conquer” is this FarmHer’s Key to Success 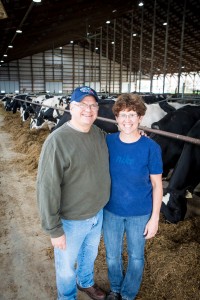 Growing up on her family’s dairy farm two miles east of Clarksville, Iowa, Pam Bolin saw her mom and dad work as a team. There weren’t “men’s jobs” nor “women’s work.” There were just jobs that needed to get done, so the family members divided and conquered.

Pam saw the same division of labor when she visited the neighbor’s dairy farm. And when she married “the boy next door,” Pam’s three sons grew up seeing their parents work as a team. Their sons also took turns doing laundry, making meals and doing the dishes because their mom enjoyed working outside as much as she did inside.

“I think we all need to look at our passions and pursue them,” says Pam. “I don’t play the gender card. I never wanted to get a position simply because I was a woman. I wanted to be voted into office or selected to represent the industry because I was qualified for the job.”

Early in their marriage, Pam and Dave became involved in Swiss Valley Farms’ Young Cooperators (YC) program. They served on the YC board and were just one of two couples selected to represent Swiss Valley at the 1982 National Milk Producers Federation’s Annual Meeting where they had an opportunity to meet other young dairy farmers from across the United States. This conference really opened the door for them to become more involved in the industry they both love.

“Dave was asked to run for district director for the Swiss Valley Cooperative. Because he was already serving as a county Farm Bureau officer and had a seat on the National Guernsey board, Dave suggested that I put my name on the ballot. While Dave was fully supportive of my involvement and believed in my leadership abilities, the man who had asked Dave to run thought it was a great political move. He said, ‘There are two other gentlemen running, so Pam probably won’t win any way. This will be a great way to keep the Bolin name out there, so you can run again in a couple of years, Dave’.”

Pam ended up tying with one seasoned dairyman in that election, so the tie-breaker was giving an impromptu speech about why they wanted to hold the position. Twenty-nine years old at the time, Pam stood up and shared her belief in the dairy cooperative system and talked about her experience being involved with the YC program. She got elected and became the first female to serve on the Swiss Valley Farms Co-op Board of Directors.

“To be involved off the farm, you have to have support from your family. Dave has been so supportive,” she said. “It also helped that both Dave’s parents and my parents lived in the area and could help with the farm when we both traveled. I couldn’t have served on the Swiss Valley without their help because our boys were 3, 6 and 8 when I got elected.”

During her 26 years on the Swiss Valley co-op board, Pam held several positions. She became board chair in 2007 and held that position until she “retired” in November 2015. However, retired doesn’t really describe Pam nor Dave. Although neither one milks, they both help with animal care. All the milking cows and calves are kept at New Day Dairy where their middle son lives with his family. Pam goes there to check on the calves two or three times per day as needed; Dave focuses on the 82 heifers at their place.

Pam also remains active in dairy industry promotions through Midwest Dairy. Each state has its own promotion group, and then six state representatives are chosen to serve nationally on Dairy Management Inc. These promotion groups partner with restaurants, as well as promote dairy menus through programs like Fuel Up 60 on a national level and Live Healthy Iowa on a state level.

“I’ve always worked full time on the dairy, and that’s something Dave and I discussed before we got married. We wanted to be partners in the operation,” says Pam. “Dairy farming is more than a livelihood. It’s really a heritage that we get to carry on. The Bolins have been farming here for 126 years. I feel blessed to share what I love doing with the next generation.

During prayers yesterday, my 6-year-old granddaughter listed things she was thankful for: ‘spending time at Grandma and Grandpa’s house, safe travels for Mommy and working with Daddy.’ Even though our other two sons aren’t involved with the dairy, Matt and James have said they appreciate having the dairy here so they can share it with their kids.”

Pam’s workload is a lighter these days now that Dan and Lynn are responsible for the day-to-day farm management, but she enjoys remaining involved with the dairy and staying active promoting the industry. She’s enjoys having more “grandma time” as she helps balance the workload when Dan and Lynn travel on behalf of the dairy industry.

Thanks to industry leaders like Pam, today’s FarmHers have role models who inspire them to live their dreams. Click on this link to virtually meet other women, who have been featured as part of our “Roots in Boots” series. If you know of someone you’d like us to feature, please comment below.