Why "1994" is Significant to Agriculture 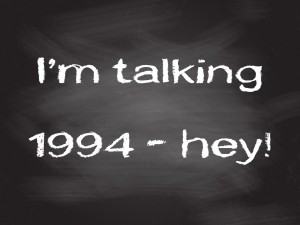 Jason Aldean’s hit single, “1994,” is prompting country fans like me to reminisce about the year when musicians like Billy Ray Cyrus made a fashion statement with a mullet, Justin Bieber was born, the OJ Simpson trial was headline news and a gallon of gas cost $1.09.  Also during that time, Joe Diffie was a platinum recording artist. 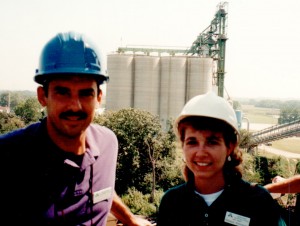 Shannon was serving as a lobbyist for the Agribusiness Association of Iowa. One highlight that year was coordinating barge tours to help legislators understand how altering water flows would impact getting farmers’ crop to market.

Diffie’s music greatly influenced Aldean, who was a high school senior in 1994.  That’s why lyrics to “1994” reference at least eight of Diffie’s hits including: “Pickup Man,” “Honky Tonk Attitude,” “So Help Me Girl,” “Third Rock from the Sun,” “C-O-U-N-T-R-Y” and more.

Country music stars like Luke Bryan, Keith Urban and Dierks Bently have joined in the fun by posting photos of themselves, circa 1994.  Although these musicians are in a class of their own, I thought it would be fun to share a few photos from the Latham family album today on TheFieldPosition.com.

I also wanted to highlight a few historical events that greatly shaped the agricultural community including the seed industry: 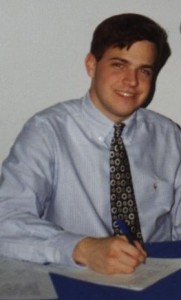 In 1994, Chris Latham was a junior at Drake University in Des Moines.

Fast forward nearly two decades, farming practices are still coming under scrutiny and some people are still debating the merits of biotech seeds.  But you can’t dispute the fact that today’s farmers grow more food, using barely half the energy and fewer resources for every bushel of grain, gallon of milk, egg and pound of meat.

The next time you reflect upon “the good ol’ days,” I hope you’ll keep in mind these facts on farming and the environment:

The year 1994 is significant to John Latham because that’s the year Tom Latham was elected as a U.S. Congressman. Tom’s absence from day-to-day operations with the family’s seed business created an opportunity for John to come onboard as a salesman. (John is pictured second from the right.)