The U.S. Department of Labor (DOL) is apparently moving “full steam ahead” with its plan to implement new farm youth employment guidelines.  Under the proposed rules, simple tasks like using a hand-held flashlight or even a garden hose or unloading a truck are deemed far too dangerous for a teenager.

While the DOL has pledged to take another look at the language pertaining to a parental exemption regarding youth employment for 14 and 15 year olds, this could just be a smoke screen or a distraction from the larger issues the DOL has yet to address.  The DOL fibbed about easing up on farm youth labor regs, according to an article published yesterday by the American Agriculturist.

The DOL has not pledged to make any changes that would allow children to work on their grandparents’ farm, their aunt and uncle’s farm, or even that a family farm that is organized as a limited liability corporation, which is commonplace today.  As a grandpa who enjoys having his grandchildren help with farm work, I’m personally concerned about the DOL’s intent to regulate work my grandkids can do on the farm. 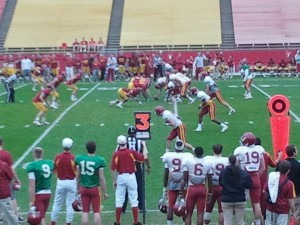 The strong work ethic and the can-do attitude that is developed through farm work was evident last Saturday as I watched my grandson Devin play in Iowa State University’s spring football game in Ames.  Despite having an injury and tonsillitis, that boy played with heart!  I’m very proud of Devin, and I know that kind of “toughness” is what it takes to play Division 1 football.  But, I also believe a lot of that grit and determination on the gridiron was developed through farm work. 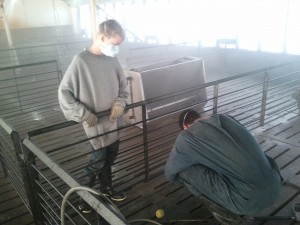 Working on the farm as a child builds a strong work ethic.

time he was a tot.  He enjoys driving the four-wheeler and farm equipment.  He comes home from college on weekends to help with planting, harvesting, and even cleaning out the hog barns.

While watching Devin play football last Saturday, I found myself thinking about a comment made during my recent visit with Senator Tom Harkin in Washington, D.C. Sen. Harkin said he thinks the DOL needs to protect farm kids.  And if Sen. Harkin and the DOL get their 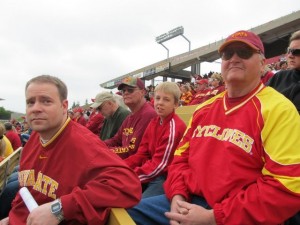 way, kids like Devin would never have a chance to experience farm life.  How do bureaucrats, living in urban areas where the only green space is a park, know more about keeping kids safe on a farm than farm families?

We cannot let misled Washington bureaucrats destroy 4-H and FFA and the way our kids learn!  Farming friends, I urge you to contact your congressmen and the DOL, so the federal government doesn’t prohibit young people from participating in agriculture – and from carrying on your family traditions.