Growing Seed Beans is a Family Tradition for the Bruns Family 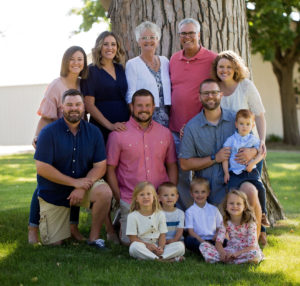 Just as Latham Seeds is a multi-generational, family-owned business, growing our high-quality soybeans has become a legacy for many North Central Iowa farm families.

“I have enjoyed working with everyone at Latham Seeds,” says Steve Bruns. Steve has been a contract grower of Latham® seed beans since 1999, but he has many more years of experience. While he was in high school, Steve worked on weekends and during the summer for Latham grower Hugh Porterfield. Steve later custom farmed Hugh’s ground for 20 years.

“The people I work with at Latham are the ones I’ve known since grade school,” adds Steve, who grew up northeast of Alexander, Iowa, on a farm his grandfather purchased in 1949. He and his wife, Karen, raised their three children in the same house where Steve was raised. “We go to church together. We’ve sat on bleachers watching our kids play. We are all community!”

Like many young people, Steve left the area for a few years before he decided to choose farming as his livelihood.

“Farming is the last thing I wanted to do when I went off to college,” says Steve, who graduated in Commercial Arts. “I worked in advertising for a few years and decided it wasn’t for me, so in 1980 I moved back to the area and started farming.”

“I had to quickly take over the farm, right in the middle of the Farm Crisis,” says Steve, whose father, Dean, was just 44 years old when he passed. “Luckily, I didn’t have the chance to accumulate a lot of debt, which forced a lot of out farmers out of business during those turbulent years.”

“Contracts to hog producers allowed for a steady income and took away the market swings, so I got back into the pork industry in 2000,” says Steve, who operated a 4,000-head site for 20 years. Steve and his family were recognized in 2005 as one of Christensen Farm’s top producers, so their photo hung outside the Animal Learning Center at the Iowa State Fair. “The most enjoyable part of hog production was the people I worked with from service managers to load crews to truckers and repairmen. Everyone was working together to raise a quality product.”

Although he’s no longer producing pork, Steve uses hog manure for fertilizer on as many acres as he can.

“Hog manure gives an extra yield bump if conditions are right when it’s applied. We’ve seen a 10- to 20-bushel yield bump when manure has been applied under the right conditions,” says Steve.

Now that he has retired from pork production, Steve hopes to have more time for golfing, fishing and hunting. Karen worked 21 years for the postal service and retired in 2014 after serving the last eight years as postmaster. She enjoys spending time sewing, walking, gardening, traveling and spending time with family.

“Karen helps a lot on the farm. She keeps this place looking great. She also does most of the ripping in the fall and field cultivating in the spring, and she still finds the time to make sure we all have a full lunch cooler to take with us to the field every day,” says Steve. “A few years ago, we had some volunteer corn escapes in a field of seed beans. She cleaned up the entire 200-acre field by herself while we combined other fields.  I’m sure they wouldn’t have made the grade if she hadn’t done such a great job.”

Taking pride in a job well done runs in the family. Eric is proud to be a sixth generation Iowa farmer. Eric and Steve farm some acres 50:50, and they also run some of their own acres. In addition, Eric has been a contract grower for Latham Seeds since 2010. A graduate of the University of Iowa, Eric also works as an insurance agent. His wife, Traci, earned a bachelor’s degree in education from the University of Nebraska – Lincoln. She also earned a master’s degree in Education and is an ESL teacher. They live in Latimer with their children, Haidyn and Hudson. The Bruns’ oldest daughter, Jami and her husband, Adam, both graduated from Iowa State University. Jami is an interior design strategist. Adam has an MBA and is a vice president of product for Denim Social. They live in Huxley with their three children, Anea, Cale and Drew. The Bruns’ youngest daughter, Lindsey, and her husband, Zeb, graduated from Coe College. They live in West Des Moines where Lindsey is a nurse anesthetist, and Zeb is a salesman.

The Bruns family enjoys gathering at the farm for great meals like pork casserole, a recipe passed down by Steve’s grandmother Elsie.