When Melissa (Bisbee) Moretz was 5 years old, she went into business with her brother and sister. Their father purchased a few ewes for them to raise. They were in charge of feeding and lambing them. As they grew older, they accepted more responsibility, including the finances.

“This is where my farming background began. It was an effort made by my parents to help my siblings and I save money for college, but it developed into much more. As we grew older and became 4-H members, we decided to sell the sheep and get into cattle and swine,” says Melissa, who served as a high school ag instructor and FFA advisor before becoming a senior portfolio manager in 2017 at a local bank. “I showed breeding beef at the county fair along with market swine at the county and state fair. I farrowed swine for my Supervised Agricultural Experience (SAE) program in FFA. I participated in many career development events (CDE), met many people, served as a chapter officer for two years, and learned what hard work really was.” 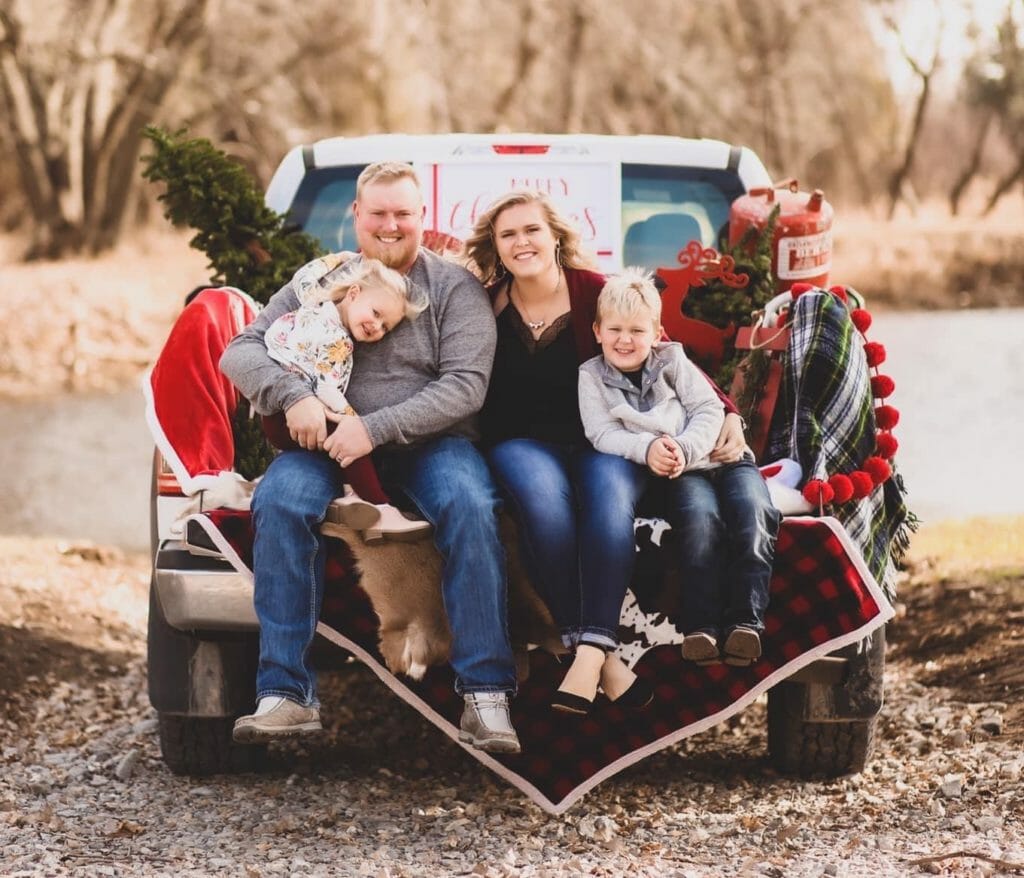 With so many life lessons learned, it’s no wonder that Melissa and her husband, Nate, desire to raise their family on a farm. She says she loves coming home from work and taking their children to the barn.

“Raising our children on a livestock and grain farm has already begun to instill a strong work ethic within both of them,” says Melissa. “Having livestock gives my children an opportunity to learn about the circle of life at a very young age. They have also learned how to care for any bucket bottle calf that ends up on our farm, and they get so comfortable with them that they are more pets than cattle by the time they are weaned from the bottle.” 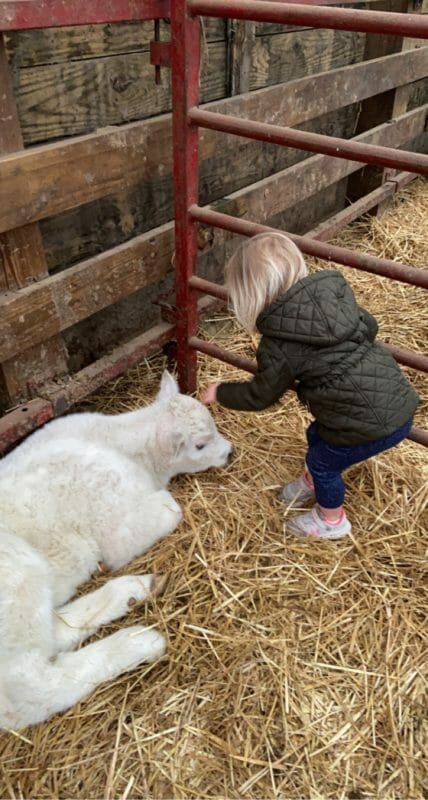 The Moretz’s two-year-old daughter enjoys chasing her brother around the farm and checking on the family’s calves.

Their five-year-old son is in preschool. He loves to farm any chance he gets. His two favorite things about the farm are spring calving season and riding in the planter or combine with his papa (Nate’s father).

“This year for Kole’s class show-and-tell, we were able to do a Zoom meeting with his class. Kole shared a new calf that was born the day before our Zoom meeting. Kole explained to his class how to take care of calves and why we raise them. The class even got to name the baby. Rainbow is now happily out in our pasture with her momma.”

The Moretz’s two-year-old daughter wants to keep up with her brother. When she isn’t chasing her brother around the farm, she helps her mom deliver meals to the field. She enjoys a good picnic in the tractor. She also loves playing outside on the swing set and going for bike rides.

Nate and Melissa also farm with Nate’s parents, calving about 120 cows/heifers each spring. As young farmers easing their way into the operation, Nate and Melissa began to purchase market steers and heifers to finish out. Melissa says they care for each animal in the best way possible with two goals in mind: (1) keep our animals safe and healthy; and (2) produce quality offspring.

“A special bond forms between people who are working together to accomplish a common goal,” says Melissa. “Both Nate and I were raised on farms and want to teach our children the life lessons that, in our opinion, are learned best on the farm. Responsibility, hard work, life/death, and teamwork are a few of the valuable lessons I have learned on the farm and want to share with our family.”

In addition to raising kids, crops and cattle, the Moretz family has been Latham® seed dealers since 2015. 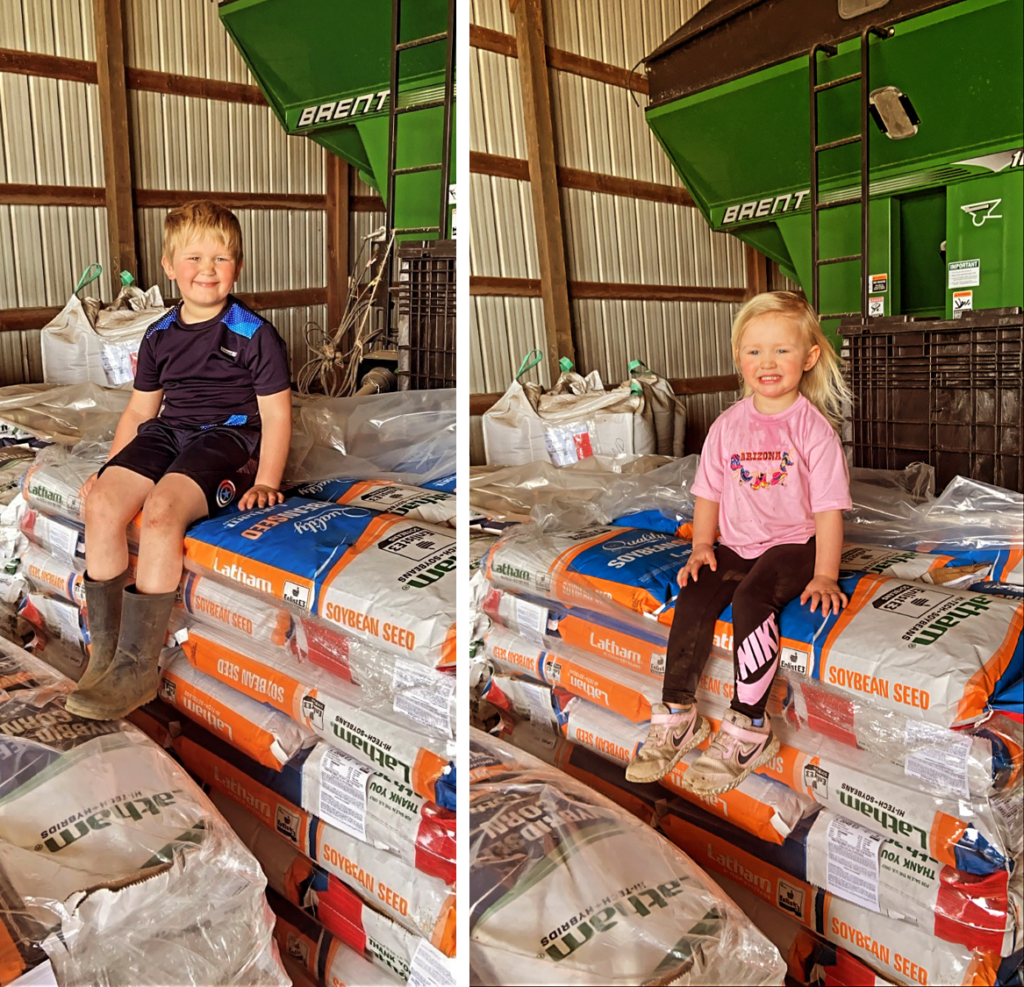 The Moretz children pose for a photo on a pallet of Latham seed. The family has been Latham seed dealers since 2015.

“Our Latham Hi-Tech Seed dealership has really taken off in the past couple of years. This has been a great side business for us and a supplemental income,” says Melissa. “Many customers continue to be impressed each year by the products they purchase. They show their appreciation by ordering larger volumes the next year and/or referring us to other farmers in the area. There’s nothing better than word-of-mouth advertising! We are very excited to sell for Latham and can’t wait to see what the future holds.”

In celebration of May Beef Month and the season of tractor picnics, today we’re sharing one of the Moretz family’s favorite recipes for pizza burgers.

Recipe by the Moretz family

To Prepare for Group: