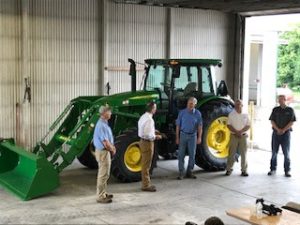 A healthy environment, positive economic bottom line and responsible social participation are critical elements for a sustainable agriculture, says Iowa’s 2020 Conservation Farmer of the Year Mark Jackson of Rose Hill. Jackson is proud to be a fifth-generation farmer in the rolling hills of Mahaska County in southeastern Iowa.

Jackson was honored during a ceremony in July when Iowa Agriculture Secretary Mike Naig presented the award, which is sponsored by the Iowa Farm Bureau Federation and the Iowa Department of Agriculture and Land Stewardship.

“With all that he does in conservation, and with all of his work to pass that knowledge on to future generations, Mark is absolutely deserving of this award,” said Secretary Naig during the award presentation.

Jackson’s dedication to conservation and water quality was instilled within him from a young age. After graduating from Iowa State University in 1974, Mark began farming with his father and grandfather. His earliest conservation efforts included planting no-till corn into soybean stubble in the 1980s. 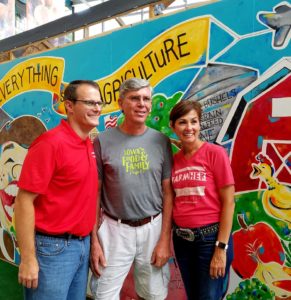 Mark Jackson with Lt. Governor Adam Gregg and Iowa Governor Kim Reynolds tell the story of agriculture to consumers at the Iowa Food & Family’s exhibit at the Iowa State Fair.

“As simple as no-till may seem, it wasn’t common at the time and definitely comes with its own unique share of challenges. I started with the basics by seeding grassed waterways where there were none, grassed headlands on hillsides and grass buffers along streams. Biodiversity includes creating pockets of wildlife refuge as part of our efforts for healthy soils and clean water,” says Mark. “I encourage everyone to try cover crops, start small and strive for continual improvement. Go to education meetings, network with others, broaden your knowledge base and utilize cost-share programs.”

For his early conservation efforts, Mark was awarded Farm Bureau’s Young Farmer & Rancher of the Year in 1982 and the American Soybean Association Conservation Legacy Award in 2006.

“Part of our farm has been in the family for 130 years, so we recognize the value today of what my grandfather did. Through today’s technologies, we have improved upon my grandfather’s basic efforts. We conduct on-farm research, including cover crops, working closely with the Iowa Soybean Association and Practical Farmers of Iowa. We continue to update our practices in our efforts to improve our land for the next generation,” says Mark, who farms in partnership with his son, Mike, and works closely with his brother, Tom. 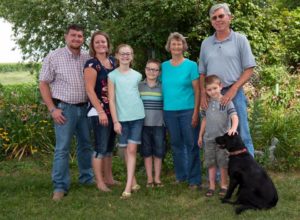 Mike and his wife, Mary Beth, are proud to be the sixth generation living on their family’s 130-year Legacy Farm. They’re raising their three kids in a house built in 1908 by Michael’s great great grandfather. They, too, are living their legacy by caring for the land. For their commitment to cover crops and soil health, Mike Jackson was named one of America’s Best Young Farmers and Ranchers in December 2019 by DTN/Progressive Farmer.

Less than two percent of the U.S. population actively farms, so the Jacksons believe it is vitally important to help others understand what they do and why.

“As a child, I loved listening to stories handed down and have grown to cherish my deep connection to agriculture,” says Mark, who chronicled aspects of farm life monthly in the Iowa Food & Family Project’s online “Farm Life Journal.” He also gave a TED talk “Hands Across Generations” because of his sustainability efforts with Unilever. 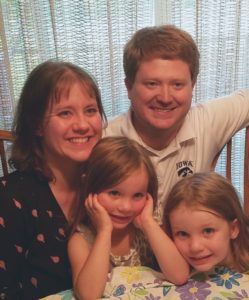 Whether he is talking to various groups or writing a diary entry, Mark covers everything from sustainability to equipment repair and farm expenses. He also shares personal family stories about the joys of farming with his children and grandchildren.

Mark and his wife, JoAnn, are the proud parents of two children and five grandchildren. Their daughter, Kate, teaches in the New Sharon school district. Her husband, Dustin Hite, served several years as mayor of New Sharon and is currently serving his first term in the Iowa House of Representatives.

“Family is what it’s all about,” says Mark. “I also enjoy the fall harvest because it is the culmination of our year’s efforts. Most farmers get 40 chances in their career, but I’m fortunate to be completing my 46th year. I guess you never have to work a day in your life if you enjoy what you do.”

In anticipation of fall harvest and to promote the pork his son raises, today Mark is sharing with us one of his family’s favorite recipes for Baked Pork Chops and Rice.

Jackson 3 Mark and JoAnn Jackson with Mike, Mary Beth and their children.

Phil Long Puts His Passions for Teaching, Technology and Research to Work