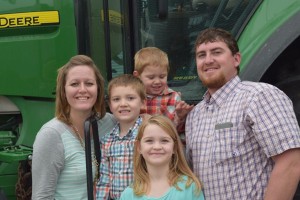 Just shy of 30 miles from where they originally met, Mike and Mary Beth Jackson are carrying on a legacy of the land. They’ve made their home in the house that Mike’s great great grandfather built in 1908, and they’re proud to be the 6th generation living on their family’s 125-year-old farm.

Like most little boys who grow up on a family farm, Mike wanted to follow in his father’s footsteps and farm. He grew up east of Oskalooa, Iowa, which is about 60 miles southeast of Des Moines. Mike was involved in FFA through high school, where he raised sheep for his Supervised Agriculture Experience (SAE). As a large believer in the SAE program, he explains that the experience gave him and other classmates a good dose of the reality in the agricultural industry.

Mike graduated from Muscatine Community College with a degree in Feed and Fertilizer Management. Knowing that would provide him with practical knowledge, he knew it would help him pave his way back to the farm with a unique skillset.

Following graduation, Mike didn’t hesitate to put his degree to work. He built his first 1,200 head SEW (segregated early wean) swine building and began farming with his father, Mark and Uncle Tom. He and his family knew that expanding their operation into the swine industry would help present the farming opportunity for more family members. 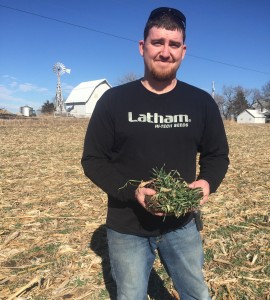 “We have always been familiar with the Latham® Seeds brand as being one notch above the rest,” Mike said. “Aside from their superior products, I wanted to work for a family owned seed company located in the area I would serve.”

Initially attracted to the idea of cover crops for yield bump, Mike explained that he quickly learned that building soil health and building yield went hand in hand.

The Jacksons started using cover crops in 2015. They wanted to experiment to see what best fit their land, so they started with a few small trials. They liked what they saw and flew rye on 290 acres of standing corn. The positive impact on erosion and nutrient control peeked Mikes interest. In the winter of 2015, he bought a drill and drilled nearly 600 acres. Mike started a trend as he started custom drilling cover crops for other area farmers.

“In the short-term, we have noticed the most benefit of cover crops with erosion and nutrient control,” Mike said. “I am looking forward to seeing the positive results continue and translate into a yield bump.”

Mike and Mary Beth met at the city square in Pella, Iowa. Mike smiles and says, “Like most small towns in Iowa back in the 90s, our weekend nights consisted of driving around the town square and seeing who we would run in to.”

Married in 2008, Mike and Mary Beth were happy to build on their interest in agriculture together. Mike explains that he can constantly count on Mary Beth. She manages the books and is always willing to prepare meals and help run equipment during the busy seasons.

Sharing a passion to tell their agricultural story, Mike and Mary Beth joined the Iowa Farm Bureau Young Advisory Committee. Their passion for modern agriculture is clear and they enjoy helping other young farmers work through similar situations.

Mike and Mary Beth are raising the Jackson Farms’ 7th generation, sharing their love for agriculture with their 3 children Arianna (soon to be 9), Jonathon (6) and Mack (3). Mike explains that raising a family on the farm gives him and Mary Beth the chance to teach their children by example.

“Farming for us is a lifestyle, sharing our passion with the family.” Mike says. “It’s carrying on the legacy for the next generation.”

Preheat oven to 400 degrees. Carefully cut stem off and remove seeds from jalapeño. Fill jalapeño with cream cheese. Wrap with bacon use tooth pick to hold bacon in place. Place in oven for 15 minutes or bacon is cooked. Remove from oven then let stand for 5 minutes. Remove toothpick and enjoy.