Phil Long Puts His Passions for Teaching, Technology and Research to Work 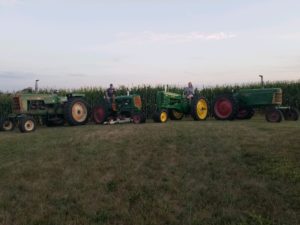 One of Phil Long’s favorite spots has been a tractor seat. When he was growing up in Jenera, Ohio, he would ride beside his dad in the tractor or combine.

Restoring tractors has been one of his favorite pastimes ever since Phil restored a John Deere B as an FFA project. He served as president of the Cory-Rawson FFA plus earned the Ohio and American FFA Degrees. In addition, Phil was a 10-year 4-H member.

Phil’s involvement in 4-H and FFA greatly influenced his career path. Upon graduating from high school, he enrolled at Ohio State Agriculture Technical Institute (ATI) and worked on the ATI farm.

“My interest in precision ag started at ATI. I worked a lot with precision ag on the equipment with ROI with swatch control on sprayers, auto steer and auto guidance,” says Phil. “My boss would let me move the globes around from combine to tractor. He also had students get in the cab with me, so I could teach them how to run the equipment.”

“In grad school, I got to do quite a lot of work with reflectance tool called the Crop Circle. I ran the crop sensor a lot. You see them put on sprayers now to adjust nitrogen rates on the go. In simplest terms, it shows how much photosynthesis is going on and how much nitrogen it needs. It’s kind of like an ‘on the go’ tissue test as you drive through the field. It was interesting to get to experiment.”

“There aren’t many people who get a project as good as I did with my thesis,” adds Phil, who got the opportunity to work with Dr. Shaun Casteel on his research project. “I got to look at soybean lines that most people don’t ever get to see. We were working with cultivars from the 1920s. We were studying 80- and 90-year-old cultivars to see how they have changed and observed how nutrients moved throughout the plant.” 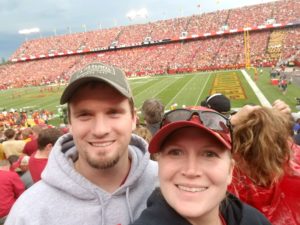 Also while he was in grad school, Phil shared an office with a doctorate student in wheat breeding. The two graduate students got along famously, so Phil took a job with Purdue Extension to remain close to Shaylyn while she finished her PhD. Upon graduation, Shaylyn was offered a job as a corn breeder in Iowa. The couple had always planned to move to Iowa, but they never planned for it happen just two months after their wedding. Phil then took a job working with a precision agriculture software company prior to joining the Latham Team.

“I ran every precision program in that position. I worked with every monitor because we installed things in cab and weather stations. I learned so much in a short time,” he says.

“What intrigues me the most about precision agriculture is that we can focus on specific areas of a field and manage the field with a level of accuracy that was never before possible,” adds Phil, who joined Latham Hi-Tech Seeds in February 2017  as a precision agronomy advisor. He and Kilah Watson have been broadcasting a weekly “Ask the Agronomist” video series since November 2017. I’m proud to be part of a team that helps reduce risk for our customers, save them time and make them money.” 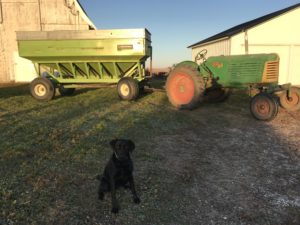 Phil says he really enjoys working for a family-owned company and being part of a team. He feels blessed to find a job he enjoys that is so close to his wife’s home farm. He and Shaylyn farm 80 acres on their own. Phil also helps his father-in-law farm. He custom seeds soybeans and cover crops, as well.

In their free time, Phil and Shaylyn enjoy being outdoors fishing or hunting. Their Black Labrador Retriever is named Rivie (pronounced Riv-ee). She enjoys going pheasant hunting with them.

“Shaylyn is an outstanding shot. I’m not as good as she is, but I enjoy it,” says Phil. “We also really enjoy kayaking. I love beautiful water so much that I proposed to my wife on a kayaking trip.”

Phil and Shaylyn also enjoy cooking together. Today they’re sharing with us one of their favorite recipes.

Recipe and image sourced from https://www.foodnetwork.com/recipes/paula-deen/spinach-and-bacon-quiche-recipe-2131172