We become what we practice… Some children pretend to fly a spaceship to the moon or treat their tricycles like they’re fire trucks. Others, like Andy Edson, practice becoming a business owner. 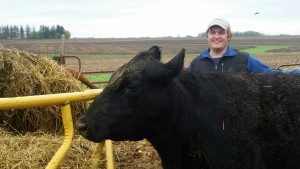 an entrepreneur,” says Edson, who farms with his parents Dave and Connie near Nashua in Northeast Iowa. “One of my favorite toys as a kid was a cash register. I’d take my sisters things and charge them to get it back,” he says as he gives a dimpled smile.

It wasn’t long before Andy’s interests moved into farming and raising cattle. He purchased his first heifer calf when he was 14 years old and a member of the Bradford Eager Beavers 4-H Club. He showed “Girl” in the 4-H Beef Show at the Chickasaw County Fair, and she became the foundation for his beef herd.

When Andy became old enough to join the Nashua-Plainfield FFA Chapter, beef became his Supervised Agricultural Experience (SAE). He put so much time and effort into recordkeeping that he earned both the Iowa and the American FFA Degrees. Andy also had the honor of being named an American Star Farmer Finalist at the 2012 National FFA Convention in Indianapolis.

“Andy is an outstanding leader and has developed one of the most extensive SAE programs I have had the opportunity to work with in my 29 years of teaching agricultural education,” said FFA advisor Ron Zelle in a 2012 interview.

“I grew up around cattle. Dad always had about 50 Holstein steers, and I have great memories of helping him do chores from the time I was barely big enough to carry a bucket,” says Andy. “I started my own beef herd with one 4-H heifer and had 20 cows when I went to college. I didn’t think it was fair that my dad had to do so much of my work during the week, so I thinned down my herd. Girl is still a part of it, and she’s expecting her 10th calf any day.”

The first calf drops on the Edson farm during March Madness and, if everything goes according to plan, they’re done calving before corn planting begins in April. Andy’s original plan was to sell club calves, but those plans changed when he had the opportunity to farm more ground. 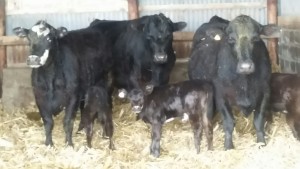 Andy began renting farmland his freshman year of college. When an opportunity to rent a neighbor’s farm was presented during Andy’s senior year of college, he arranged his schedule so he didn’t have classes on Fridays or Mondays. That allowed him to make the two-hour drive home from college on Thursday night, so he could spend four days straight on his farm.

“I knew there was a future here for me. My dad is a good mentor, and I enjoy being my own boss. It just felt right for me to pursue farming fulltime,” says Andy. An internship through Iowa State’s Agricultural Entrepreneurship Initiative also helped confirm his decision because he missed the farm when he way away.

As a student in Iowa State University’s College of Agriculture & Life Sciences (CALS), Andy majored in Agricultural Business with a minor in Agronomy. Iowa State CALS pairs incoming freshmen with upper classmen mentors, and Andy was partnered with Carly Cummings and Elizabeth Burns-Thompson. Both Carly and Elizabeth were Ag Business majors, who were active in the student NAMA (National Agri-Marketing Association). They recruited Andy to the ISU NAMA marketing team. He was on the team for four years and was a member of one team that won the national competition!

“To prepare for the competition, we spent a lot of time finding research to help us make decisions. It was fun to see the marketing – not commodity marketing – side of agriculture. It helped me understand how different companies place products and why they’re targeting certain audiences,” says Andy.

“So much work goes into those marketing plans,” Andy goes onto explain. “Just learning the ‘whys’ behind the marketing decisions that a company makes can be applicable to any business. It really taught us a decision-making process.”

Andy puts those decision-making skills to use daily in his farming operation. His future plans include his family’s farming legacy.

“I hope to contribute to our operation and strengthen it while staying sustainable through the adoption of new technologies and exploring new business ventures,” says Andy. “Though my operation’s focus will continue to be on growing corn and soybeans, I’ll always keep a few cows around. They’ve always been a part of my life and there’s something about calving that never fails to give me a renewed appreciation for nature and the way of life that God has blessed me with.”

After working hard all day, Andy enjoys a home-cooked meal. Today he’s sharing two of his favorite recipes with us.

“I like recipes that are simple and delicious and both of these fit the bill,” says Andy. “This pot roast comes out tender and full of flavor while the bars provide a perfect end to the meal with a sneaky-good balance of sweet and salty.” 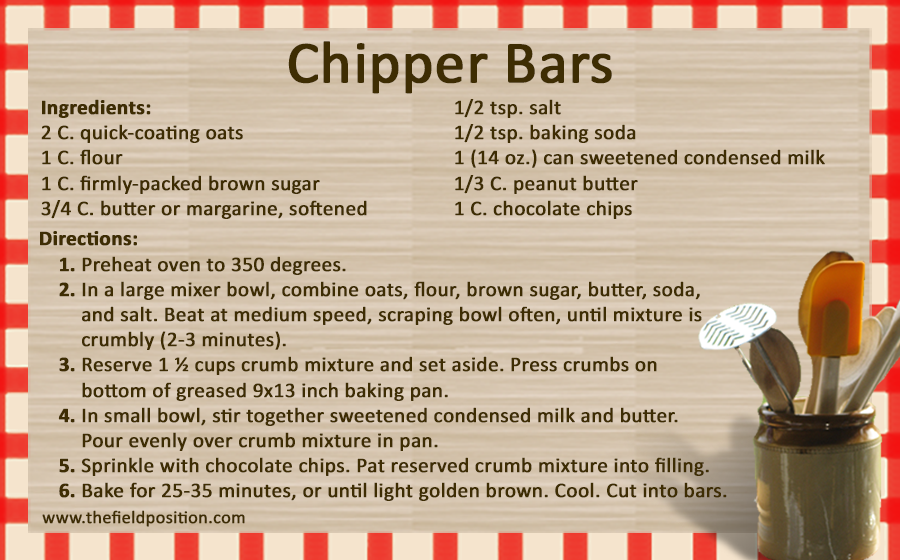