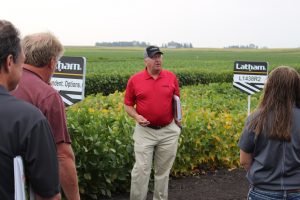 Q: What’s the outlook for soybean seed supply in 2021?

I’m certain this concern stems from the uncertainty about the registration of the Xtendimax®, Engenia® and FeXapan® herbicides, as well as the tough time we had this year getting production acres planted, especially in the Dakotas. I’m happy to report that planting went well enough that we expect good supplies of all trait versions. If demand for Xtend soybeans falls off, demand will likely increase for E3’s. Order your E3 soybeans early, so you don’t have to worry about supply.

Q: Is it necessary to inoculate soybeans every year?

Since the early 1970s, researchers have believed that inoculating soybean seed isn’t necessary unless soybeans haven’t been planted in the intended field for four or five years. Today, data shows new products, formulations and even biologicals are consistently increasing yields. This is especially true in areas – like sandy soils, fields that are consistently flooded and even those that are consistently dry – where soil bacteria have a tougher time getting established. Latham’s Northern Product Specialist, Gary Geske, recommends testing some of these newer products in your own fields.

BASF in April was granted registration of this herbicide, which is intended to be used as a pre-plant or pre-emergent herbicide on LLGT27 or GT27 soybeans only. Originally, BASF was hoping it would also be labeled for post-emergent use, but that will have to wait until there is more information made available. Additionally, South Dakota is the ONLY state within Latham Country where farmers can use Alite 27 and then only in these counties: Aurora, Beadle, Brown, Brule, Buffalo, Clark, Codington, Hand, Harding, Jerauld and Spink. The Alite 27 label mentions Product Bulletins for Minnesota and Wisconsin, but my understanding is these are for counties in those states where soybeans are not normally grown. BASF is hopeful more counties will be added.

Q: How do XtendFlex® soybeans differ from Xtend®?

XtendFlex is the newest trait innovation from Bayer CropScience (formerly Monsanto). These soybeans carry tolerance to glyphosate (Roundup, Glyphos, etc.) and dicamba (Xtendimax, Engenia, etc.) herbicides just like the Xtend soybeans do. In addition, they are tolerant to gluphosinate herbicides like Liberty or Ignite. This will be another three-way stacked herbicide tolerant trait that farmers can use to fight weed resistance. Full acceptance is expected soon but is dependent on final clearance by the European Union. All other major soybean-importing countries have given their approval. As a side note: Latham Seeds has an EPA-stewarded XtendFlex plot at our research farm this year. It is similar to the plot we had in 2019 but contains about twice as many XF varieties. Stay tuned for more about this exciting new technology.