Spring is a Fresh Start, so Try Something New in the Field 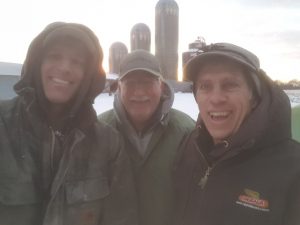 When the sun shines, the snow melts slowly and temperatures are above normal on a late Midwest winter’s day, folks across the Upper Midwest start thinking about the hope that comes from the changing of the seasons. No crop would ever get planted without optimism.

“South Dakota farmers came off an unprecedented in 2019 and then faced our hardest fall ever,” says Dustin Leiseth of Hazel, SD, who has farmed since 1999 with his father, Paul. “I was in Aberdeen for township meetings last fall, so I called Dad to ask how harvest was going. He said, ‘Well, nothing has broken down yet today.’ So… that’s how we were measuring success.”

Both final drives and the cleaning fan went out in the last 500 acres of combining. The Leiseth family finished the harvest on December 6, 2019. To commemorate the occasion, Dustin took a selfie in the field. Pictured with him are his father and Roger Adams, who has been one of Paul’s best friends since kindergarten. Roger has helped with harvest for years, taking vacation days to help the Leiseth family before he retired in 2014.

“I’ve never been so happy to be done,” says Dustin. “I told my dad, ‘You’re the only person I would want to do this with. I can’t see myself farming if one of my sons doesn’t farm with me. I’m going to tell my son, ‘This is our legacy. My grandpa moved here. Your grandpa and I have fought to keep this land in our family.  I want you to farm with me and for this farm to be yours someday, if that’s what you want. Farming must be someone’s passion. No operation can truly be successful if the person who is running it doesn’t have a strong desire and passion for it.’  I just want us both to have open and honest communication when that day comes.  It is, and always will be, about his passion in this life, not mine.” 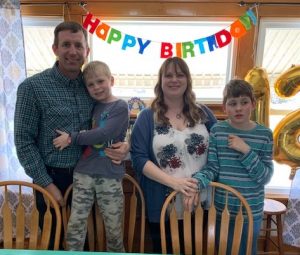 Dustin is the third generation who felt called to farm this land, and he says he never wanted to do anything else. Like his father did upon graduating from high school, Dustin attended Lake Area Tech in Watertown where he learned many useful skills from electrical wiring to welding and carpentry.

“I was fortunate that my parents said they wanted me to come back to the farm,” says Dustin. “My wife understands this life comes with sacrifices. Bridget is very supportive. She makes my life even better, and she’s great with our sons. I make the farm go, and she keeps our family whole. Together we unify.” 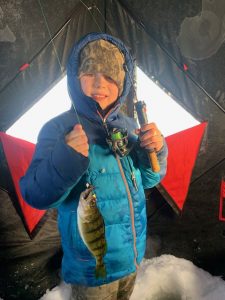 “I get to raise my sons on the farm where they have the freedom to be who they are,” says Dustin, who enjoys fishing and boating with his family. He also enjoys hunting pheasants and white tail deer. “The boys ride bikes down the back-country roads and the 4-wheeler across the home section. They just experience good country living.”

Huntin’, fishin’, and lovin’ every day… That’s the prayer that a country boy prays.

Like the lyrics to a good country music song, Dustin is thankful that God blessed him this way.

“There are several things I enjoy about farming. Every day is different. Days may be similar, but no two days are ever the same,” says Dustin. “Spring is a fresh start and time to try a few new things like new seed varieties, increasing seed populations, or applying fertilizer at varying rates and application timing. I strive to try one or two new things each year. The good Lord only gives us a finite number of chances to plant and harvest on this earth, so I try to make each one better than the last.” 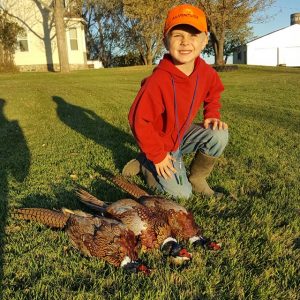 Flooding washed away gravel and washed out culverts in 2019. Large amounts of snowfall this winter has many South Dakota residents concerned that snowmelt combined with spring rains will cause more flooding in 2020.

While many farmers are aware of how flooding in 2019 left their farm-to-market roads in disrepair, Dustin is aware of how much damage was caused statewide. He has been a township clerk for the past 10 years. He has served as

a director for the South Dakota Association of Towns & Townships for the past four years and as its president for the past two years.

“South Dakota has experienced two disasters in the past eight years that have involved FEMA,” explains Dustin, who started attending township meetings as a 17-year-old with his dad. “Our last disaster started at the end of March 2019, and 11 months later we haven’t received a check. Our township was the second out of 13 to complete all of our documents, but we’re still waiting for the money to arrive.” 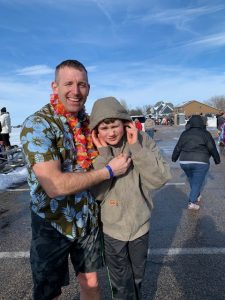 Dustin Leiseth and his son, Preston, in February participated in the Polar Plunge on Lake Kampeska. The event raises approximately $45,000 annually for Special Olympics South Dakota and the Special Olympics Watertown.

Flood repairs push South Dakota townships to financial brink. As president of the state’s Towns & Townships association, Dustin attends meetings for the joint committee of Appropriations in Pierre. He meets with the Secretary of Transportation and the Association of Counties. Five entities have been meeting throughout the winter because they were supporting a bill to help fund large culverts.

There is a push from the hunting and gaming commission for township roads to be repaired and maintained, so hunters and fishermen can get to the sloughs. The problem is that neither the county nor state wants to pay townships to rebuild these roads. More money is needed for infrastructure repair at a time when statewide revenue is lower due to fewer hunting and fishing licenses.

“Hunting and fishing has been a large part of South Dakota’s tourism, so there is a push underway to engage the next generation. If kids don’t have a parent to go with, they grab their phones instead of a pole. When we were kids, we’d call one another and go fishing. That’s not happening today.”

Spring is on the horizon, so there is renewed hope that families will return to the great outdoors to enjoy camping, fishing and riding bicycles. To help power through these remaining late winter days and those damp, early spring days, Dustin is sharing with us one of his family’s favorite recipe for a hearty stew.