When dairy cattle judging is non-negotiable 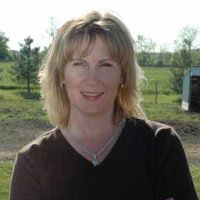 Guest Blog by Laura Moser
Laura is an agricultural writer living with her family and their small herd of registered dairy cows in Dansville, Michigan.

I distinctly remember my first trip to the World Dairy Expo in Madison, Wisconsin. I was a junior in high school and a member of a Green Bay FFA program (read: city kid). When my advisor asked for volunteers to compete in the FFA dairy judging contest all I heard was “who wants a day out of school” and my hand shot up – no training, no local competition – just volunteers. I went home that night and tried my best to explain to my parents why I would be going to Madison to look at cows. Although my motive for going to Madison that day had little to do with cows – what I saw was hundreds of kids with a passion and confidence I didn’t understand and certainly didn’t possess.

Fast forward a few years (ok, maybe a decade or two) and I find myself once again amazed by the confidence and passion dairy kids have – but this time I am not watching strangers – I am watching my son, Lucas. And I am watching my husband watch our son. Because 31 years ago he was the one competing in the national contest – a contest he went on to win. 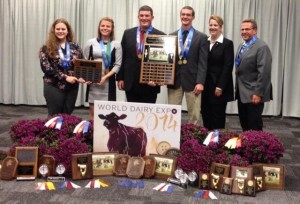 By a one-point margin, the Michigan 4-H team won the Super Bowl of dairy judging at the 2014 World Dairy Expo!

In the years since my first trip to Madison I have been immersed in the dairy industry – working for a milk marketing cooperative, marrying a dairy farmer (who is now the owner of a construction company), and raising three kids all active in 4-H and FFA programs. Unlike me, when my husband Stan went to Madison to judge dairy cattle in the national 4-H contest – it wasn’t on a volunteer basis. He had spent years training and preparing for that day. He won local contests entitling him to a place on the team. He knew first-hand the skills, the opportunities and life lessons gained through judging and although we never talked about it – it was clear he would want our kids to have the same exposure.

Dairy cattle judging in our house is non-negotiable – everyone participates. It begins each year with the anticipated arrival of the Hoard’s Dairyman judging issues. (For 5 consecutive months the cover of the magazine features a class of cows to be evaluated.) The arrival of the magazines sparks contentious discussions around the kitchen table as the kids make their case for their rankings. Because in our home it’s not the love of music, or a particular sport or hobby that is being passed down – it’s the love of good cows.

For 10 years Lucas has listened, argued, argued some moreand listened again to his dad about good dairy cattle. About how to rank the cows and more importantly how to justify his ranking. You not only rank the cows, but must explain to the official judge why you ranked them in a particular order. Watching and listening to these discussions (I seldom have much to add), I know there is much more than dairy cattle evaluation lessons being learned. And I know where those impressive traits of the dairy kids start – at their kitchen table. 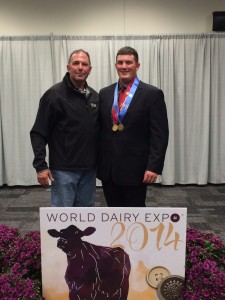 When Lucas Moser stepped into the ring to participate in the judging contest last week at World Dairy Expo – he like his dad – has spent years working for this day with the help of some awesome 4-H coaches.

When Lucas stepped into the ring to participate in the judging contest this year – he like his dad – has spent years working for this day (with the help of some awesome 4-H coaches). He has done well at the state level and competed at other contests – but World Dairy Expo – has the bragging rights of The National Contest – the Super Bowl of dairy judging. The anticipation leading to the contest was high – and while it wasn’t talked about much – having a dad that won the contest put a little added pressure on him to do well.

Results at a judging banquet are not straightforward – there are several layers of competition, and it is difficult to tell who is “winning” as the scores are announced. Finally, as the overall winners were called, we began to see how the night would shake out. Michigan had three individuals in the top 10 – with Lucas placing second. After the individuals were announced, team placings were given. By a one-point margin – the Michigan 4-H team won the contest! While Lucas did not place first, being a part of the team that did was just as rewarding. He was able to share the moment with his teammates.

So as Lucas closes his chapter on 4-H dairy judging, the lessons continue to build –the lessons of teamwork, and appreciation and hopefully the lesson to help pass this family tradition on to his younger brother and sister, and someday to his own kids. It is my hope that all kids find their passion. For our family, it shines through the cows. In other families it may be something else. But I believe helping kids find their passion – is one of the greatest gifts we give our children.

Nothing like a spicy appetizer to fuel some passion: Here’s our family’s favorite snack: