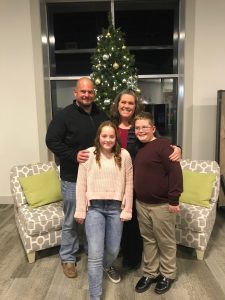 Oftentimes there’s one defining moment that leads to big changes in someone’s life. It might be a heart attack at age 40 as it was for Melissa Murphy or a humiliating moment on the wrestling mat in middle school as it was for Casey Schlichting.

Casey shared so many insights and provided a wealth of easy exercise tips that we’re sharing his story in two parts. (Click here to read Part I.)

“Everyone is busy. We all have time commitments. That’s why you must make a conscious effort for fitness,” says Casey, who raises corn and soybeans on his family farm near Clear Lake in North Central Iowa. “You can get the exercise you need anywhere – literally anywhere. You don’t even have to go to a gym. You can learn so much on YouTube without it costing you a dime.”

Casey finds inspiration, as well as gains knowledge about health and nutrition, by following body builders and triathletes online. The White Rhino, who holds the all-time raw world record of 2,226.6 pounds in powerlifting, is one professional whom Casey particularly enjoys following.

One of the best cardio workouts, according to The White Rhino, is taking three, 10-minute walks daily. Who can’t make time for that?

“I encourage my farmer friends to make time for healthy practice, especially during spring planting and fall harvest,” adds Casey. “Not only will it get your circulation flowing, it will provide you with more energy to power through the field work.” 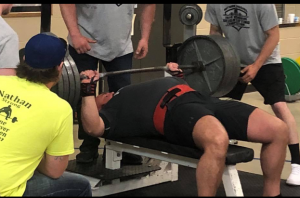 Taking short walks also gives your brain a break, says Casey, who has been known to take periodic walks during all-day industry meetings.

“I’m not used to sitting all day. I feel better when I get out of my seat and get moving during breaks,” says Casey, who serves on the board of directors for Five Star Co-op and for the Cerro Gordo Farm Bureau. He also has served as the Iowa Soybean Association’s (ISA) District 2 director since 2017.

There is always so much good food served at farmer meetings. Donuts for breakfast and Scotch-a-Roos for afternoon snacks are one of Casey’s downfalls.

“If I travel to a meeting, I run in the morning or do the elliptical to get my blood flowing before the meeting starts. It works best for me to workout first thing in the morning whether or not I have to travel. My morning workout is my time to clear my head,” says Casey, who takes on more household responsibilities while his wife, Teresa, works full-time off the farm as principal at Lincoln Intermediate School in Mason City, Iowa. Casey takes their active twins, who are in fifth grade, to and from school. He also works his schedule around their extracurricular activities. 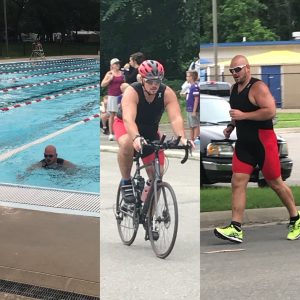 Casey participating in a Sprint Triathlon.

It can be hard to stay on track, as Casey knows first-hand. He says maintaining a healthy weight has been a life-long struggle. He started making a conscious effort to build muscle and fuel his body the summer before his freshman year of high school. He had been doing well for years. Like many of us who get married and get busy with our jobs and families, Casey put his own health and wellness needs on the back burner.

“Thanksgiving Day 2015 I stepped on a scale and almost went into shock,” says Casey. “Our scale went to 330 pounds, and I weighed more than that. Talk about a wakeup call! I started going to the Y (YMCA). I made a conscious effort to eat better.”

It was during that time that Casey also got active on social media, following health and wellness professionals. He also stayed in close contact with friends who encouraged him to mix up his exercise routine.

As a former high school athlete who played college football for one year at Waldorf College, Casey is motivated by competition and is always looking for his next challenge. He ran his first triathlon in 2017 – almost on a whim.

“From my days of go-kart racing, I have a buddy in North Carolina. He’s a strength and conditioning coach there, and he does IRONMAN competitions. Another buddy in Nebraska is into athletic training. I was chatting back and forth with both guys, and they convinced me that I should switch up my exercise routine by biking and swimming. Since our farm is connected to Clear Lake with a bike trail, I bought a bike. It’s a 13.7-mile ride to the lake, so I started doing that regularly. Then I swam 32 laps at the Y. It took me 90 minutes, but I made my goal of swimming 1 mile without dying.”

As the chat continued, one of Casey’s buddies says he read that Mason City was hosting a spring 2017 triathlon. That meant Casey had three months to train for it.

“Never in a million years did I think I’d be able to compete in a triathlon. My biggest challenge was figuring out the nutrition needed to get the macros needed. I learned a lot about nutrition from Triathlon Taren on YouTube and Twitter. However, race day nutrition was another challenge.”

Casey learned that it’s important to time snacks to keep your body fueled throughout the competition. He didn’t drink enough on the bike ride, so his legs cramped when he got off the bike and started running.

“I had passed a ton of people on the bike, and then they all ran past me. My goal was to finish – and I did,” said Casey. Then he entered a second triathlon in 2018 to improve his personal time.

All the exercise and attention to diet allowed Casey to maintain his weight loss from 2015 until January 2019. For no apparent reason, Casey started gaining weight. He was irritable and lethargic. He had a hard time getting out of bed in the morning and lacked the focus to complete daily tasks. A visit to his local doctor suggested he was depressed, but he didn’t believe that was the right diagnosis.

Casey advocated for his own health and sought a second opinion at Mayo Clinic. More blood work and a sleep apnea were completed. The sleep apnea test revealed Casey slept better than nearly 90% of people, so an appointment was scheduled with an endocrinologist.

The diagnosis was low testosterone, which he learned is a common problem that is very often misdiagnosed. Symptoms of sleep apnea, depression, hypothyroidism and low testosterone are very similar. Casey has been on a testosterone replacement therapy regiment for about six months and says he’s feeling like his old self again. He encourages anyone who has questions about it to reach out to him on social media (@getfitfarmer).

With his energy levels returning, Casey is now focused on a new goal. He plans to compete in the Strongman competition during the 2020 Iowa Games. Events will be decided on the day of competition but they may include: Farmers Walk, Tire Flip, Vehicle Pull, Loading Relay, Arm Over Arm Pull, Ground to Overhead Relay, Car Deadlift, and/or Overhead Press.

Best of luck to Casey as he works toward yet another health and fitness goal!