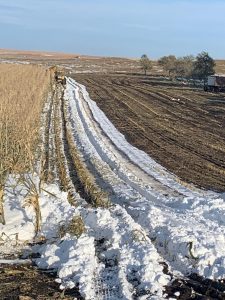 Who knew a silage chopper could be used as a snow blower? We’re finally making a little progress after last week’s big snowfall last week. 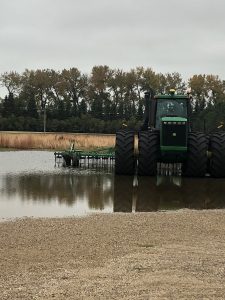 Above freezing ground temperatures combined with air temps in the 40’s is helping melt the snow that fell over the weekend.

Fields are very wet and soft, so we farmers might not get back in the fields before it freezes again. Safety is important, so be careful with tow straps and chains if needed. 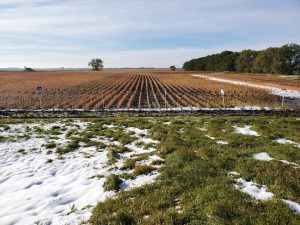 Christmas weather came early this year as last week much of South Dakota received 6 to 8 inches of snow with an inch of rain. A killing freeze brought an end to the 2019 growing season also. Many farmers were either just getting started with harvest or had just started combining when the storm hit. Soybean yields ranging from 30 to 50 bushels are common. Corn moisture is ranging from 25 to 40 percent, depending on maturity and planting date. 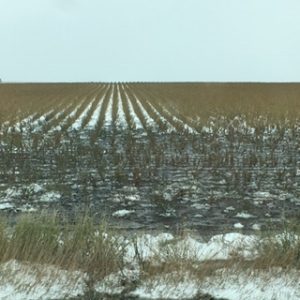 This old adage applies to our first big snow event this season in South Dakota. Temperatures during the first half of last week were in the 70’s, and combines were rolling like crazy to harvest as many soybeans out the “big rain and SNOW storm.” The storm hit last Thursday… it rained and snowed. It rain and snowed. And it rained and snowed! Day-time temperatures dropped into the 30’s and dipped into the 20’s at night. Most areas of Southeast South Dakota received 3/4 of an inch or more of rain and very little snow, but the northern and western half of the state received 3/4 of an inch of rain plus six to 18 inches of snow! 😲 We experienced three days of wind, moisture and cold temperatures before the sun graced us with her presence on Sunday. Now all that remains are a few piles of snow and some mud. This week will warm slowly back into the 60’s.

What does all this mean for our crops in the field?? Corn that made black layer is sitting pretty good. Test weight was locked in, so it needs to dry down. However, there are a lot of fields that hadn’t quite hit black layer before the killing frost. This will affect test weight, as well as final yield. The severity will vary by field. My fingers are crossed that we will get by our chin hairs because many fields just needed one more week of 60’s to finish.

Soybeans that had hit maturity will handle the frost just fine. In fact, this will just speed up harvest. Those fields that still had a lot of green in them will be slow to dry out and may have some test weight issues. I’m sure results will vary by field. I don’t think we will see too many pods swelling and popping from the moisture they absorbed because we were dry enough before the storm. We will now see the combines able to go again. 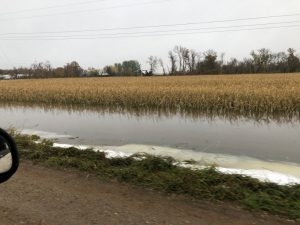 A historic October blizzard dumped three to six inches of rain before two feet of snow fell in my western and northern regions. Wind gusts reached 60 miles per hour. Roads were closed across North Dakota and into western Minnesota counties. Now we’re dealing with snowmelt, so flooding is a concern. Pictured below is fields in my northern region. 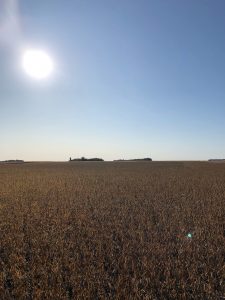 It has been a slow week for many farmers as some nasty weather hit over the weekend. Many soybean fields still need to be harvested across southern Minnesota. 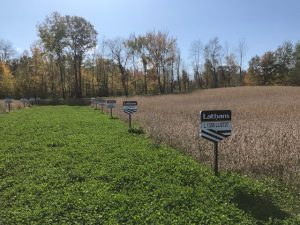 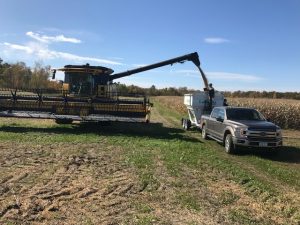 Much of this region is wet, and most of it seen the first snowfall.  Early last week we had three days of good harvest weather followed by three days of cold, wet weather. These photos were taken last week before we pulled off our first Latham® soybean plot in Northern Wisconsin. Plot reports will be rolling in soon! 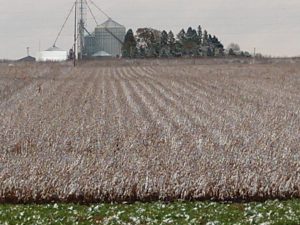 Weather continues to delay harvest. Some snow accumulated over the weekend across North Iowa and southern Minnesota. Fortunately, the snow didn’t last long but we need drying weather. 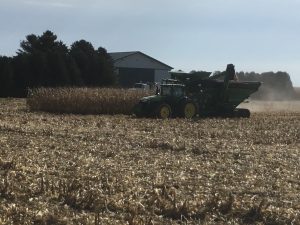 This field in Cerro Gordo County (Iowa) is Latham® LH 5245 VT2 PRO RIB. Moisture is running around 22% with yields around the 220 mark and climbing. Last week many soybeans were combined before the rain and snow fell Saturday. Some farmers started combined corn again on Sunday and Monday with moisture ranging from 22 to 27%. Today I expect to see some farmers combining soybeans. 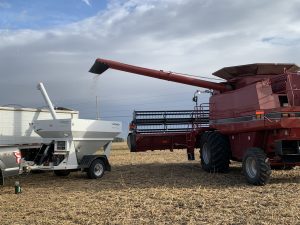 Moisture continues to slow down harvest. Much of Northwest Iowa received some sort of precipitation over the weekend. Sunshine would be welcome. 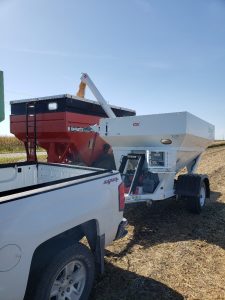 We calibrated the yield monitor right before a Latham® dealer entered the field near Pocahontas, Iowa. His first pass in this field of  Latham’s 2228 R2 made 65.5 bushels per acre. 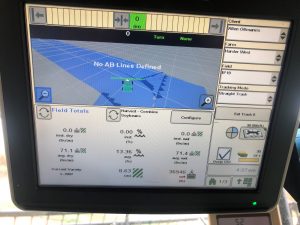 Latham® 2887 R2X soybeans are performing well again this year. If you’re farm from north of Hwy 20 to south of Interstate 80 and plant Xtend® soybeans, this Latham number should be part of your 2020 crop plan. 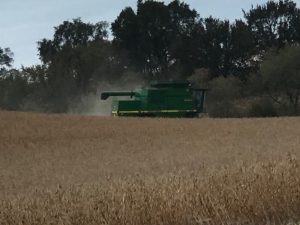 Look at how clean this field of Latham® 2684 LibertyLink® soybeans is! This field averaged 60 bushels per acres and 11.7 moisture.

Many types of stalk rots and plant pathogens are present after the weather we’ve had this growing season. As a result, our state’s corn crop stands on some very weak legs. Effective harvest management will be a key to successful fall!