Japanese Beetle in Corn and Soybeans 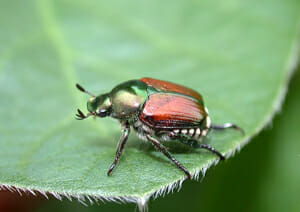 Japanese beetles cause damage to corn by interfering with pollination and lead to defoliation in soybeans. Their distinct metallic-green heads and bronze wings make them distinguishable from other look-alike beetles. The insect undergoes one life cycle per year with adults reaching 5/16 inches in length.

Eggs are laid during July and August and overwinter until temperatures rise in the spring. For both corn and soybeans, adults migrate from grass and begin feeding in late May or early June. The peak emergence for Japanese beetles occurs 4 to 5 weeks after feeding begins.

Japanese beetles tend to feed in concentrated areas and in groups. After the female burrows into the soil, she will lay 1 to 4 eggs at a time for several weeks. Adult grubs feed on turf grass in late summer and early spring before emerging to feed on crops. 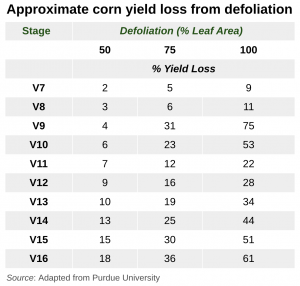 In corn, Japanese beetles can feed on silks and interfere with pollination. Though leaf feeding in corn is possible, a majority of the economic impacts are attributed to silk feeding. Plants should be treated if there are three or more beetles per ear.

Research from the University of Tennessee found that repeated clipping of silks did not always lead to yield loss. More importantly, the environment has a stronger influence on the damage Japanese beetles can cause. Higher yield loss in infested corn plants that were under drought stress as opposed to plants that were not. 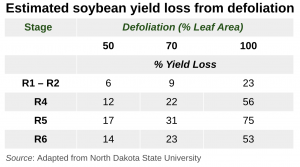 In soybeans, the beetle strictly feeds on the soft tissue bordering leaf veins, leaving them skeletonized. Soybeans growing in sandy soils are even more susceptible to defoliation from Japanese beetles. Though yield loss from Japanese beetles has not been quantified, figures from North Dakota State University (see table) point to the general yield impacts from defoliation.

Research from the University of Nebraska advises treatment when damage reaches 30% defoliation before bloom or 20% defoliation during flowering. As long as beetles appear to be actively feeding, insecticide application is advised.

Japanese beetles are easily confused with other species of beetles, including masked chafers and May or June beetles. Be sure to consult with your local Latham representative to confirm suspected Japanese beetle infestations and determine the right treatment plan.