Getting to the Root of Hybrid Performance

by Bob Foley of RFS Global

This fall will go down in history as one of the most anticipated harvest seasons ever. Never have we experienced such widely varied circumstances. It doesn’t seem to matter if we are discussing conditions regionally, state to state, farm to farm, or as we have seen way too much of this year, plant to plant.

Walk into almost any field in Latham Country and you’ll notice the variability in studying just one row. The huge difference in ear sizes, plant maturity, and ear-to-ear kernel maturity with a 50-foot circle of plants seems to be widening. Overall, it is apparent that the extremes of the 2019 planting season seem to be widening. There are yellowing patches that we didn’t notice in July or random bunches of plants simply folding up but surrounded by much better plants. While driving down the road and looking in through the lower canopy, suddenly we can see six rows in because the bottom canopy is disintegrating in a matter of a few days.

We might say these things goes back to the spring weather, and for the most part, we would be correct – partially. Depending on where you farm, the conditions we’re seeing now probably stretch back to last fall before most of the harvest took place. Remember when that beautiful crop was 26 to 28% and many of us held off for drier corn before harvesting? Remember the 3+ weeks of rainfall across most of Latham Country?

Much of what we faced this spring, as well as what is occurring in our fields now, started last fall during field activities. Compaction resulted when combines, carts, trucks, spreaders and tractors rolled across wet fields. This spring just added to it. We were beyond wet, so we invented ways to cut corners to plant when the window opened. How many of us know of a field where the headlands pollinated 3 weeks before most of the field?

In 2019, 51% of the U.S. corn crop was planted after May 25. Much of this acreage was planted because time was simply running out. For the most part, we experienced a gentle July and August, which probably has given many of us alarm as we see parts of this crop folding up. 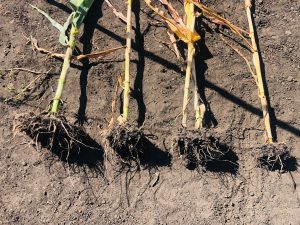 By and large, most of this variability and early death is coming from the culmination of factors that we’ve discussed at Latham field days, meetings, and in this article. Contrary to the coffee shop discussion,roots don’t stay shallow because there is water available.  Roots stay shallow because they’re blocked from growing deeper. Roots don’t grow deep in some “hunt and search” mission. They grow down because of gravity. Furthermore, when plants pollinate well but have sub-par roots, the plant withers early, ears hang, field get spotty, and we notice the crop maturating in spots.

The short answer to this “my field has more weak spots than I thought” boils down to a two basics: roots and compaction.  For the most part, compaction could not be avoided.  Last fall and this spring simply didn’t allow for the best stewardship practices.

However, I would like to consider what we might have done or what we may be thinking of doing next year in the way of roots (besides a good field ripping). I have spoken often on the strength of later hybrids (relative maturity or RM) versus earlier hybrids. Without question, later is better in most agronomic factors. In general, later RM hybrids genetically have higher yield capabilities, are better in heat, are better in stress, provide more leaf area for sugar production, are typically healthier, have better standing in the fall, are easier to harvest, have higher test weights, etc.

And this year, I would support the idea that later hybrids generally handled some of the compaction issues better. They might have improved root growth/penetration, but I think it is more practical to assume that they just start out with a better toolbox to take the pressures of a season vs the early RM hybrid. I hear the discussion about “wetter corn” and “drying cost” and I won’t argue with each man’s economies. However…

Let’s consider the huge data set against switching to earlier hybrids in late-planting situations (later wins). The cheapest water to remove from a kernel is the 30% to 20% moisture. Here are a few things to consider: 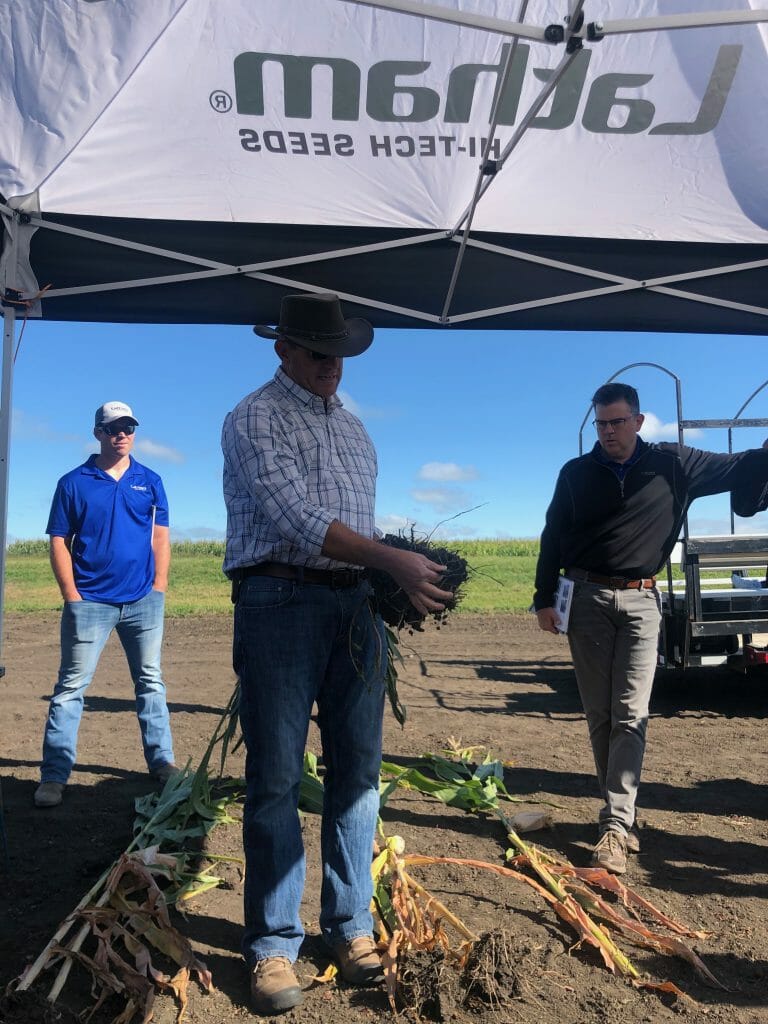