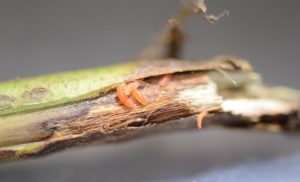 Soybean Gall Midge (SGM) caused extensive damage in 2018. It already has been reported in Iowa, Minnesota, Nebraska and South Dakota this season.

Scout around the edges of your soybean fields, especially those areas that are closest to fields where SGM was spotted last year.  The adult stage of this pest is a fly from the genus Resseliella. The adult insects are so small that they go unnoticed in everyday scouting activities. Other midge flies are the Hessian Fly and the Wheat Blossom Midge.

The SGM may be spotted in the larval stages as they feed on a variety of items like decaying organic matter, fungi and, of course, galls on the stems of plants. Affected plants will appear wilted and eventually die.

Wilting also is symptom of Phytophthora Root Rot and Fusarium Wilt, so you’ll need to split the base of the soybean stem to know if the problem is an insect or disease. Once you split the stem, look for orange or white larvae.

You can see in this photo by Dr. Bruce Potter from the University of Minnesota that the larvae look like maggots. If find larvae, contact your local Extension Service immediately!  While SGM larvae are almost impossible to control once they have colonized plants, Extension personnel want to learn more about this pest’s lifecycle.  Any information you can give on how your field may have been infested will help all of us combat this pest in future years.

Because so many soybeans across Latham Country were planted later this spring than in 2018, the concern is SGM might be even more problematic this year. Last fall SGM was recorded in 69 counties of Nebraska, Iowa, Minnesota and South Dakota.

Very little is known about the biology of the Soybean Gall Midge and even less is known about methods to control it.  With your help, we can begin to know and understand more about this potential threat to soybean production.