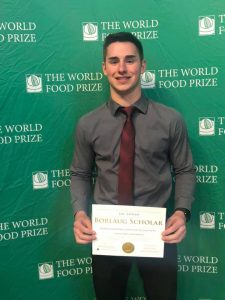 Ian Latham, a junior at West Fork High School, is one of 304 students selected to attend the 2019 World Food Prize Iowa Youth Institute on April 29 in Ames.

We’ve all heard about the need to “feed the 9,” but it’s easy to dismiss the thought. After all, global food security doesn’t impact those of us producing row crops in the Upper Midwest. Or does it?

“For you students who are 18 years old today, when Iowa celebrates its bicentennial in 2046 and you will be celebrating your 45th birthday, the population of our planet will have just reached 9 billion people,” said Ambassador Kenneth M. Quinn, president of the World Food Prize, in an address to 304 students on April 29 at the eighth annual World Food Prize Iowa Youth Institute at Iowa State University. “Whether we can nutritiously and sustainably feed all of those people is the single greatest challenge human beings have ever faced. It will be up to you to fulfill Norman Borlaug’s legacy and meet this challenge.”

If not you, who? Who will fulfill the challenge of nutritiously and sustainably feeding people worldwide?

Ever since a missionary turned farmer from the Philippines visited Latham Hi-Tech Seeds in October 2018, that country’s plight has been on our minds and in our prayers. We’re left with the question, “What could we do to help bring food security to isolated farmers in a developing country?” It’s a question our 17-year-old son, Ian, attempted to answer.

To participate in the Youth Institute, students must identify a challenge affecting food security within a specified country and propose their own solution to address the challenge. Students then present their ideas to a roundtable of peers and experts, participate in interactive activities in labs and classrooms on the ISU campus, and connect with innovative leaders from across the state.

Ian’s paper focused on increasing corn yields in the Philippines by creating a non-profit organization that would provide Filipino farmers with seed corn that has resistance to corn borer. He told peers and experts during a roundtable discussion that demonstration plots would be planted, so farmers could see how higher yields are gained from better seed. It’s a method that has already been successfully employed by Adriel Dave “AD” Alvarez. 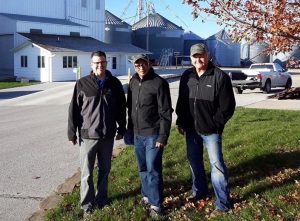 AD is a member of the Global Farmer Network through which he met Latham® Dealer and agvocate Larry Sailer of Iowa Falls, Iowa. Last October AD traveled to Des Moines where he participated in the Borlaug Dialogue and the Global Farmer Roundtable. As Larry’s guest, AD traveled about two hours north of Des Moines for a tour of Latham Hi-Tech Seeds. AD explained to us how adopting modern agricultural technology could have a positive economic impact on his country, which is comprised of more than 7,000 islands.

Modern agriculture is key to reducing poverty. It would reduce food costs and improve the overall quality of life in the Philippine. Nearly 73 percent of Camotes Islands’ land mass is in agriculture, however, farmers don’t harvest enough corn to sustain them to the next harvest. Those who live on the island must import large quantities of corn. A family member will work in Cebu; Cebu city is located within Cebu province, which is a big island. Other times family members will work overseas, and then send home money to buy additional corn. Corn, which is milled into grits, is the staple food of the Camotes Island’s approximately 103,000 inhabitants.

“We need a comprehensive approach that can effectively address issues that limit these technological adaptations,” says AD, who has successfully demonstrated that Bt corn can increase yields tenfold. 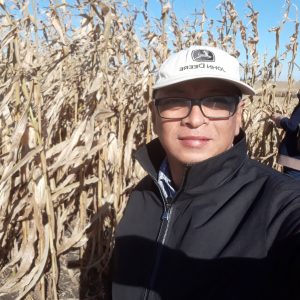 During the seven years the Alvarez family has been doing agricultural community development on the Camotes Island, AD has uncovered these barriers to adopting agricultural technology: resistance to change; lack of capital support and policies; insufficient political support; limited accurate information for farmers coupled with a proliferation of misinformation; supply limitations; logistical limitations; and location challenges unique to the island.

“In our farming journey, I have grown to understand and love farming. It is one of the most fulfilling jobs that I have ever experienced after gaining enough understanding that a lot of things depend on agriculture,” writes AD on April 29, 2019, in a Facebook note. “From being a pastor, to becoming a microfinance executive, and now a farmer, I can say that even though the latter is an arduous profession, it is the most honest, character-enhancing work.”

AD’s farm and mission have been struggling since drought struck the island in 2016. If you feel called to help, you’re welcome to connect with AD Alvarez via Facebook or email him at parakletoshelp@gmail.com.

To give you a taste of the Philippines, we’re going to introduce you to adobo. This unofficial national food is traditionally made with pork or chicken and served on a bed of rice. Because May is Beef Month and National Grilling Month, we’re sharing a Filipino-inspired recipe for Adobo Burgers. For more Filipino recipes, check out the blog “Asian in America.”

NOTES: *Substitute 1/4 tsp. dried thyme or 1/4 tsp. oregano for each bay leaf called for in the recipe, according to “How to substitute bay leaves in recipes” on “The Spruce Eats” blog.

**“The bay leaves add a distinct flavor to our Filipino adobo. Add a dash of annatto for a cheerful orangey color,” says AD’s wife, Hazel. McCormick® Ground Annatto is available at Wal-Mart or online at penzeys.com.

Football Fans "To The Rescue" on Game Day