Farmers Feed the World… So What? 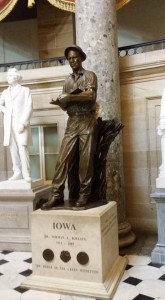 Larry Sailer says it’s fitting that during his visit last week to D.C. he got to see this likeness of Norman Borlaug in the U.S. Capitol’s Statuary Hall. Dr. Borlaug is widely called “the father of the Green Revolution” because of his work to increase food production and combat world hunger.

If there were one thing that you could do to make the biggest difference in the shortest amount of time, what would it be?

But where do we start? I believe we start with kids. If you have listened to Trent Loos this week, you know that human milk is medicine. Good nutrition during pregnancy followed by mother’s milk gives a child a great start! This time frame is so critical to the brain and its future functioning. How can an economy flourish with stunted bodies?

Food aid programs in the past have been pretty much all reactive. When there is a crisis, you want to get people fed! I was thinking about this a lot last week as I traveled to Washington, D.C. I kept thinking of the saying, “Give a man a fish and you feed him for a day. Teach him to fish and you feed him for life.” This sounds simple, but I think we all know it’s complicated!

First of all, it takes money to do anything in this world. That’s one of the reasons I was in D.C. last week with a group of farmers who are part of The Farm Journal Foundation’s Farmers Feeding the World initiative. A group of 21 farmers from 16 states are making a special effort to make a difference in the world by combating hunger.

How can we make the world a better place? Well-fed people are less likely to fight wars. Well- fed people can build a better economy. Although some people wonder why U.S. farmers are concerned about the well being of others around the world, I’m looking forward to this new challenge!