There are a variety of stalk rots that infect corn, causing extensive damage to crops and losses in yield. Common factors make corn susceptible to stalk rot including warm and wet weather, stress after pollination, fertility issues, stalk boring insects, and the presence of other foliar diseases. There are key signs, symptoms and differences that distinguish the different types of stalk rot. 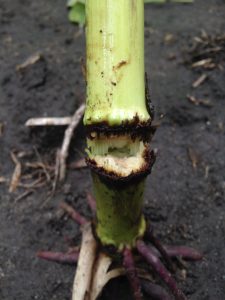 Scouting for Signs and Symptoms

Physoderma stalk rot is caused by the pathogen Physoderma maydis, the same fungus responsible for causing Physoderma brown spot. The fungal disease seems to be showing up in more and more corn fields each year, but typically shows up on random plants and  and  has minimal impact on yield. Like most stalk rot diseases, warm and wet weather favor the development of Physoderma stalk rot.

Physoderma stalk rot infects corn between the V4 and V9 stages. The disease is not associated with any foliar signs, so it is important to inspect plants closely at the base. Dark brown or black lesions will appear at the base of the stalk, and rotting of the pith will be observed upon splitting the stalk open. Overtime, blackening of the pith will move to higher nodes. Sporangia can also be found on the outside of nodes and within the rotted pith tissue.

Scout for symptoms of Physoderma stalk rot across five areas of the field. Stalks will make a distint “pop” and snap at one of the first 3 nodes above the soil line. If more than 10 to 15% of plants exhibit stalk rot, the field should be harvested early.

With this being a newer disease we are still learning differences in hybrid tolerances to both stalk and foliar phases of this disease.

As a majority of stalk rots overwinter, one to two-year rotation away from corn and controlling corn residue are key for preventing the return of the disease. Fungicides may also be applied to prevent Physoderma leaf blight , but these studies are in early phases as well given the novel nature of this diesease