Cutworms are insects that show up during the earliest growing stages of the season. The presence of cutworms can pose a threat to the well-being of corn plants, but their severity is highly variable and depends on the species. Delayed planting and corn plants shorter than 18 inches are most susceptible to undergoing severe damage from cutworms. 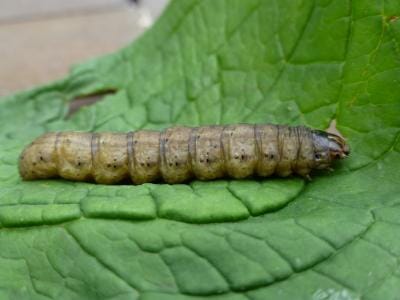 Black cutworms are the most common species found in corn throughout the Midwest. The larvae of black cutworms can be up to 1¾ inches long with their appearance characterized by a dark-gray segmented body. Black cutworms are most likely to be seen between stages VE – when the shoot first emerges from the soil and V5 – when the first five leaves exhibit visible collars. The sets of paired spots unequal in size that run along the length of the black cutworm make it distinct in appearance. Black cutworms cause damage by chewing holes in leaves and larvae will cut the lower portions of the corn plant just above the soil line. The youngest larvae will feed on leaves whereas older cutworms will feed exclusively below ground level. The first generation of black cutworm will cause the most damage, though three to four generations can be produced in a year.

The black cutworm thrives best in wet and weedy fields with poor drainage. Cover cropping can make conditions conducive for the growth of laid eggs, especially if weeds are prevalent. Insecticide is advised if cutting is evident across 2-3% of corn plants and larvae do not exceed ¾ inch in length. 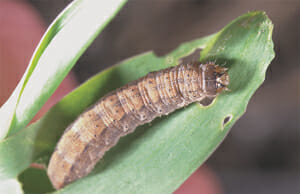 Similar to the black cutworm, dingy cutworms can form larvae up to 1¾ inches long and often emerge in fields with heavy crop residue. However, unlike black cutworms, the pairs of black dots running along the segmented back appear to be equal in size. When fully grown, dingy cutworms reach a size of one inch in length. Dingy cutworms typically only feed on leaves and do not cut plants.

These three classes of cutworms are characterized predominately by the color of their larvae. Glassy cutworms have a white, translucent segmented body with a solid orange head and cause damage primarily to seedlings.

Bronzed cutworms are colored with light orange, bronze and brown stripes running the length of their body.

Like glassy cutworms, sandhill cutworms have a translucent, light brown body that is uniform in color, including the head. Glassy cutworms are known to cause cutting damage in addition to chewing and feeding damage exhibited by other cutworms.

What to Look for When Scouting

Corn plants succeeding soybeans or legumes are most susceptible to hosting cutworms. With shorter corn plants having the greatest vulnerability to cutworm damage, scouting should begin once seedlings first emerge and continue until plants achieve a height of 18 inches tall. Look for signs of cutting, wilting and irregular holes on leaves. Uneven stand or inconsistencies in cutting across rows are also signs of cutworm damage.

Cutworms gravitate toward moist soil for burrowing. When looking for signs of infestation, dig around the base of plants to look for burrows ranging in size from three to four inches. When soil is dry, dig deeper to three inches below ground to identify burrows.

As cutworms are associated with reduced stand resulting from cutting or wilting, yield can subsequently be decreased. However, replanting is not usually necessary and is only advised if the presence of cutworms is not under control and stand has been severely impacted.

Controlling weeds can reduce overwintering and can remove an environment favorable for hosting cutworms. Tilling practices that reduce weeds and field residue will deter moths looking to lay eggs in the fall. Reduced tillage or no-till, delayed planting and overwintering cover crops are all management practices that increase chances of cutworm damage. If you see cutworm damage on 2-3% of plants and they are smaller than ¾ inch, it’s time to spray. When pre-applying insecticides to dry or crusted soils, it is advised to work the treatment into the soil so it is able to reach cutworms and burrows housed below ground.