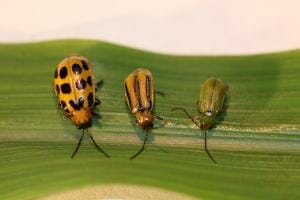 The Western, Northern and Southern corn rootworms are three variations of this insect. They grow to be ¼ of an inch long when fully mature. The larvae appear white in color with a dark brown head. After mating in the late summer months, rootworm eggs overwinter and eventually hatch in May or June of the following year.

Rootworms develop across four stages – egg, larvae, pupa and adult. The larvae feed on roots which leads to lodging and overall poor plant stand. Adult rootworms feed primarily on corn silks which can interfere with pollination, leading to lost yield. 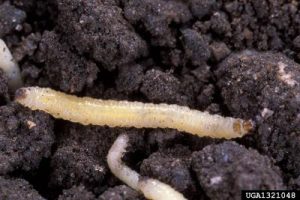 The greatest impacts on yield and quality of stand are larvae feeding on the nodal roots. Mature rootworms tunnel throughout the root system and cause significant damage or death to corn plants. Root feeding and tunneling alone can lead to a loss in yield of up to 50 percent.

When scouting in the spring and early summer, dig up corn plants and check for damage on the root system.  Look for signs of tunneling or larvae actively feeding on roots. Placing the roots of a corn plant along with attached soil in water and waiting for larvae to float to the surface is another strategy to use. In the later stages of summer, watch for beetles feeding on corn ears and silks.

North Dakota State University found that complete loss or severe damage to a single root node can lead to a yield loss of 15 to 18 percent. Crop rotation is considered the best method for combatting continued infestation.

Below is a chart to help guide your insecticide application decision.

We have Latham® hybrids equipped with resistance to rootworm have been deemed an effective method for staving off infestation. Contact your local Latham® representative to determine which hybrids will work best for combatting corn rootworm.