SOYBEAN GALL MIDGE: I mentioned in a previous post that a new insect had 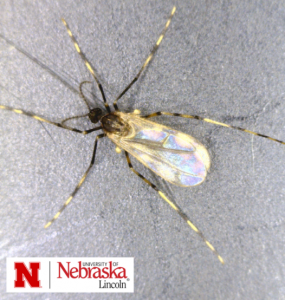 infested fields in South Dakota, Nebraska and western Iowa. It also was present in a few Minnesota counties. Prior to 2018, no midge damage to soybeans had been reported. 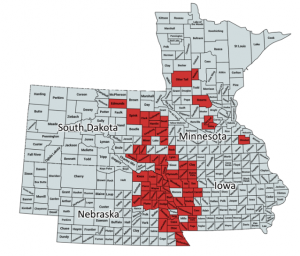 This year, however, it was reported this pest caused significant yield losses in 66 counties across this four-state area. (See map.) University of Nebraska researchers captured adult midges and sent them to world-renowned experts for identification. We know the Soybean Gall Midge belongs to the genus Resseliella, which includes 55 species worldwide. This midge is about one-fourth inch long. Note its orange abdomen, as well as the black and white bands on the legs.

(The above map and photo were taken from the 11-7-18 issue of UNL CropWatch.)