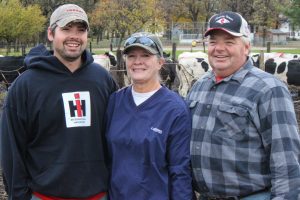 When Joel and Margaret Dirksen got married, there wasn’t enough farmland to support three families. Joel’s grandpa and his uncle were farming together, and the newlyweds wanted to farm nearby. Fortunately, an opportunity arose just a half-mile away from the home farm where their neighbor was looking for someone to help on his dairy.

“Joel has always loved animals, and he grew up knowing he wanted to farm,” says Margaret. “He loves cows and his passion for dairying grew with each year.”

That passion has become Joel’s legacy.

Three of the Dirksen’s four adult children have been involved with the family’s dairy farm. Their youngest daughter, Amy, teaches and is a counselor at a Lutheran high school. Although she left the family farm, she didn’t stray far from her roots as she and her husband live in America’s Dairyland. The Dirksen’s oldest son, Daniel, lives just down the road. He’s a full-time Operations Specialist at Post Consumer Brands in St. Ansgar. He’s a regular Friday milker and helps out whenever he can. Their oldest daughter, Christa Ryg, had been their lead heardsman and one of their A.I. technicians for 22 years. She left the family dairy at the end of September as rising healthcare costs prompted her to take a full-time job with benefits since her husband is a grain farmer. Their youngest son, Eric, has shadowed his father from the time he was old enough to walk. After graduating in 2004 from Luther Preparitory School Watertown in Watertown, Wisconsin. Eric earned a degree in Dairy Science from Northeast Iowa Community College in Calmar. Then in 2015 he became a partner with his parents in the dairy operation. 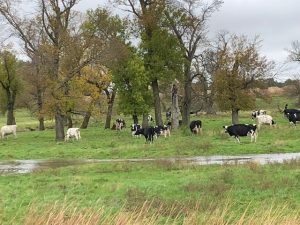 The Dirksens usually milk 120 cows, but there are just 105 in the milk line now. There are about 250 Holsteins on the farm, including young calves and young stock. It’s a closed operation, so they raise all their replacement heifers. They’ll sell bull calves or dairy beef, depending on the market.

“Babies need lots of attention,” explains Margaret, who is responsible for calf care. She gives them milk and water, keeps their bedding dry and keeps a close eye on them for signs of lethargy or unusual behavior that might indicate a calf isn’t feeling well. “You really have to pay attention to the details,” she adds.

The Dirksens keep calves in three different groups: young calves, weaned calves, and replacement heifers. These groups ensure the animals receive the proper feed rations needed for that stage of growth. From newborn to two months, all calves are in the calf barn. Weaned calves are moved to a free stall facility for three months. Once they have a vet check and are vaccinated, they transition to another pen where they start the silage program for about six to 10 months. Once the heifers are a year old, they move into the breeding group.

The heifers are usually artificially inseminated around 13 months of age. A cow’s gestation period is approximately nine months, and a cow must give birth before she’s able to produce milk. The cycle of insemination, pregnancy, parturition (birth), and lactation is followed by a “dry” period. About two months before a cow is due to calve, she will be separated from the milk cows and housed with other dry cows.

Raw milk is sold to Foremost Farms, a dairy cooperative based and headquartered in Baraboo, Wisconsin. Foremost Farms is an award-winning supplier of cheese, dairy products and ingredients. It takes high quality raw milk to produce high quality dairy products. Milk production is tracked per cow, at Dirksen Dairy. In addition to milk volume, butterfat is a key measurement. Ankle tags help indicate when the cows can be bred, and now the A.I. work is Eric’s responsibility. He also has taken over Christa’s milking responsibilities, and are always looking for reliable help.

The morning milk shift starts at 2:30 a.m. Feed is mixed, and the actual milking begins at 3:30 a.m. It takes about 2.5 hours to milk in their double six herringbone parlor. Once the milking is done, it’s time to finish the chores: Livestock is fed. Stalls are cleaned. Depending on the season, field work is done. While Joel primarily does the crop farming, Eric and Margaret help when needed. Then the afternoon milking begins at 3 p.m.

“It’s easy for people to walk into a grocery store without thinking about all the time, attention to detail and care that goes into producing quality products,” says Margaret. “We try to help people understand the amount of time dairy farmers puts into producing a product, so we give farm tours. We show guests what we feed our cows and let them see the milk in the bulk tank.”

Eric says he would like people to understand that milk is tested for quality several times before it hits the grocery store shelves. Weather greatly impacts production, so they do all they can to keep their cows comfortable. Heat and humidity decrease milk production, so they use fans and sprinklers to keep cows cool during the summer months. The sides of their buildings were removed this summer due to excessive heat, and will put them back on this fall to keep the cows warmer during the winter months.

Farming requires a lot of hard work, and markets fluctuate, but the Dirksens say there isn’t anything they’d rather do. Eric is proud to be a fourth-generation grain farmer and second-generation dairyman. This proud husband and father of three will share his love of land and livestock with his nine-year-old step-son, one-year-old daughter and two-month-old son.

Today the Dirksen family is sharing with us one of their favorite recipes, featuring the quality dairy products they enjoy helping produce.