From the Field Crop Reports: July 4

When I was growing up, farmers would say, “Knee high corn by the 4th of July will make a good crop.” This year corn in Eastern Iowa is tasseling by the 4th of July! The corn looks phenomenal in most of my territory as you can tell by this field of LH 5885 VT2 PRO RIB that was planted April 29. If we can continue to pick up timely rains, fall harvest should be great. 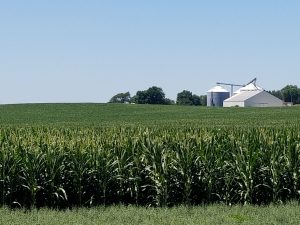 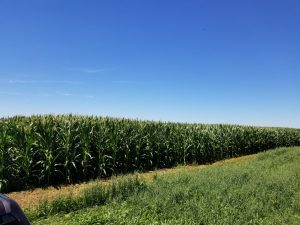 Wind storms on June 28 reached 60+ mile an hour in areas, causing this corn field (not planted to Latham) in Indianola to green snap in a large part of the field. Ponding is greatly damaged corn and soybeans fields in the central region. Ten inches of rain fell Saturday in Ankeny from 5:00 PM to 2:00 AM. What a crazy year! 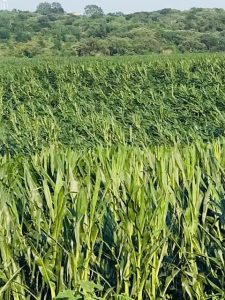 The rain just keeps coming! Last week’s rainfall totaled more than five inches, so farmers are struggling to get spraying done. This Latham® Hi-Tech Soybeans SuperStrip in Steele County Minnesota is coming along pretty good considering all the rain.  In the Black Hawk County Iowa, some corn fields are starting to tassel. 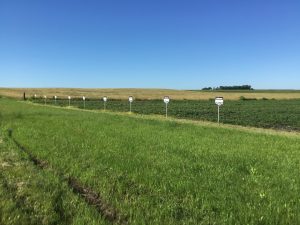 More rain fell Saturday night in Humboldt County, and this photo was taken July 2. Wherever there is ponding, the corn is dying and starting to smell like silage. 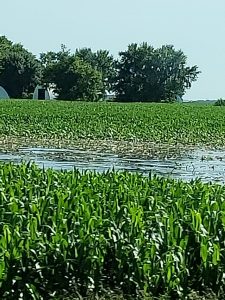 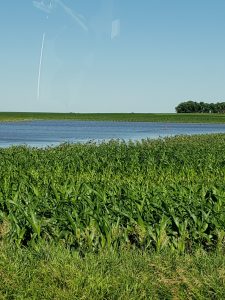 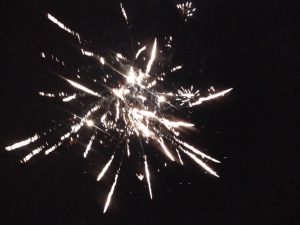 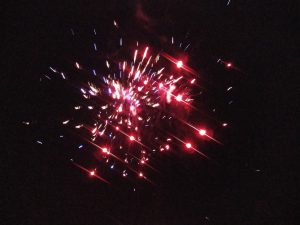 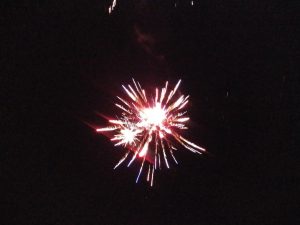 Rainfall hasn’t created favorable conditions for scouting. Hopefully, we’ll have a dry week to finish spraying and to do some scouting.

Scouting is much more efficient for farmers, who are using Climate FieldView. We can scout crops together. Their entire operation is at our fingertips before we even step foot in the field. This photo shows a farm using Climate FieldView Plus, which gives the farmer satellite field health images throughout the growing season. You then can look at a split view, as pictured here, which shows the hybrids on the left and the field health imagery on the right. It works well to view entire field, acre by acre, rather than trying to see it all on foot.

We look forward to gather yield data this fall, so we can layer it with all of this information throughout the year to make more informed decisions for the future. 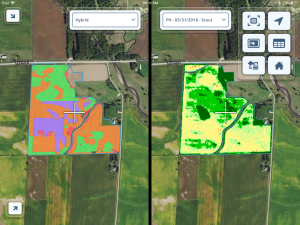 Flag leaves are showing, which means this field of LH 6224 3120 EZR will reach tassel is three to four days. 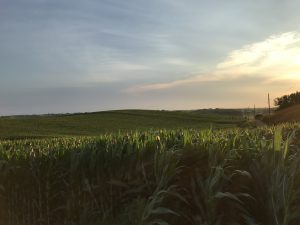 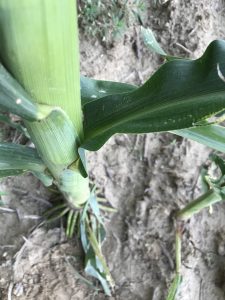 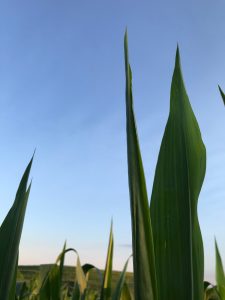 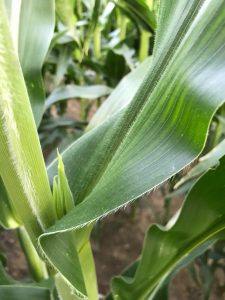 It’s a winning combination for this customer in Cambridge, Wisc.! Latham® hybrid LH 5739 SS RIB and Latham brand L 2084 R2 soybeans have had a tough spring with all the excess rain in the area, but they are still growing.

Latham 2084 R2 soybeans are one of my go-to products for soybeans in Wisconsin as this soybean performs in even the toughest environments. It is one of 20 (exclusive) IRONCLAD™ soybean brands featured in Latham’s product guide.  To bear the IRONCLAD distinction, each soybean variety must be Soybean Cyst Nematode resistant and carry an Iron Deficiency Chlorosis rating of 2.2 or better. Depending on your specific needs, IRONCLAD varieties must also protect against either White Mold or Sudden Death Syndrome with a rating of 2.2 or higher. Furthermore, these products must have strong defensive ratings against Phytophthora Root Rot and Brown Stem Rot.

A new product for corn this year, LH 5739 SS RIB, looks like it will be a new top performer in the 105- to 109- day maturity range for Wisconsin.  As a GLADIATOR™ product, it combines the best genetics and traits (including a mandatory rootworm event) available in the market today to help farmers maximize yields from corn-on-corn acres. Each  designated GLADIATOR product goes through rigorous testing and evaluation by Latham’s team of regional corn experts before earning its designation as a Latham® GLADIATOR hybrid.

We can’t wait for the results from these fields this fall! 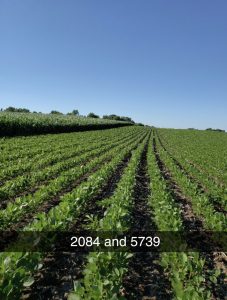 These photos show the importance of seed treatment. Untreated L 1438 R2 was planted as the outside 12 rows of the plot.  Treated L 1438 R2 was planted as one of the strips.  In the first picture, the four plants on the left were treated with Latham® Soyshield Plus™, which is a premium formulation that gives superior control of most seed and soil-borne diseases, as well as includes a systemic insecticide.  The four plants on the right were untreated.  You can see the treated plants are taller with bigger root mass and more nodules.  This is also shown in the second photo.

The last photo is a comparison of treated versus untreated. Can you tell which ones are treated and the one that isn’t? 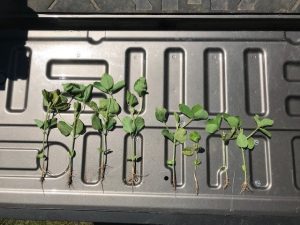 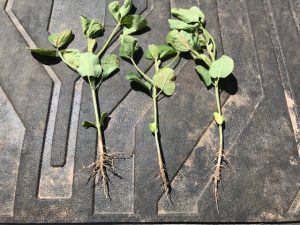 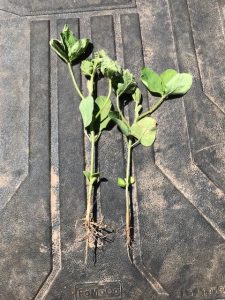 Soybean development is extremely variable across my territory. We’re seeing everything from V1 to R1 because there has been so much replanting. Due to all the rain, spraying also has been extremely challenging. This field is located near Clements, Minnesota. As the waters recede, we’re seeing more drowned out spots. 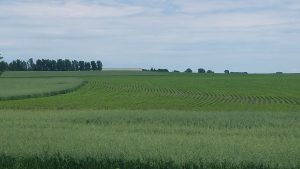 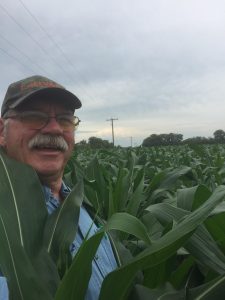 It’s safe to say our corn made it to knee high and beyond before the Fourth of July! Although many fields across Southeast South Dakota are saturated, much of the corn is in a healthy state. Many of the fields I have been in this past week are shoulder-high and look great!

This photo is of our Latham SuperStrip plot at Estelline, SD. It has been a struggle getting fields sprayed between the wind and rain, but most corn fields are clean. Farmers are having a tougher time getting soybeans sprayed. The main weed I’m seeing in soybean fields is volunteer corn. 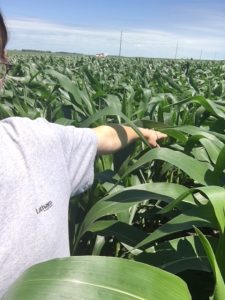 After more than 13 inches of rain fell, Western South Dakota is actually wetter than Eastern South Dakota. Drought is expanding in Spink and Brown Counties, two of the largest producing counties. Good widespread rains are predicted to fall Wednesday night. Soybeans are flowering and filling rows quickly. The second cutting of alfalfa is down and looks to yield well! 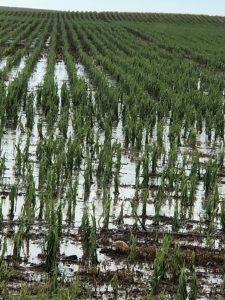 LH 5175 VT2 DroughtGard® got hailed on a week go at Hermosa. 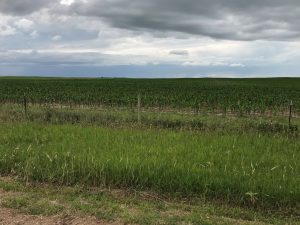 While this week’s crop report doesn’t include any pictures of crops, it still has everything to do with agriculture. This week Kyle and Bobby had the chance to host around 40 people from as far away as California, Washington, and east to Wisconsin. It was a gathering of distant relatives celebrating a 90th birthday party. What made it unique was the fact that 90% of them had no idea what a farm even was. They were all very attentive on the history of the farm. They listened as we explained how farmers produce crops and care for the land. Hopefully, they left with a new appreciation for farmers and what it takes to feed the world. 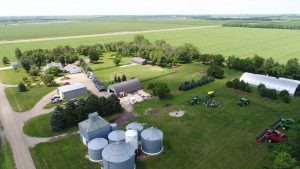 More storms hit our area this week, and we are way past the point of replanting. It seems like there has been a significant hail storm every other night, and high winds have caused lots of property damage in the Stanton/Underwood area. Farms were destroyed by winds in excess of 120 miles an hour. Many farms lost equipment, buildings, bins and a few even their homes. 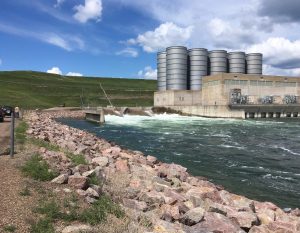