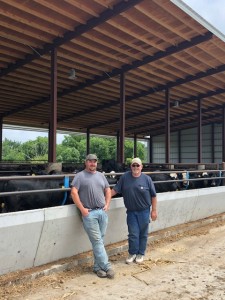 When farmers see a need within their community, chances are they’ll band together and offer a solution or two. That’s how the Albert family of Brandon, Iowa, became known for hosting an annual Memorial Day four-wheeler ride, a late summer sweet corn roast and a community tractor ride. The Alberts also organize the community’s Thanksgiving meal and are one of three farm families that takes turns hosting the Testicle Festival each January to raise money for cancer research.

One of their friends was diagnosed with cancer about 10 years ago, which prompted several local cattle producers to fry Rocky Mountain oysters and other fair-type foods. About five or six years ago, Craig Albert realized many residents didn’t have anywhere to go on Thanksgiving. He and his wife, Judy, decided to change how they celebrated the holiday.

“Now we invite the town to enjoy a Thanksgiving meal at Brandon Community Center,” says Craig. “Our son and daughter help, too. People bring in canned donations for food pantry. Free will donations go to local family or a local charity. The community really comes together. Instead of eating and running, people enjoy sticking around and talking with one another.”

Like his father, Jordan Albert grew up knowing he wanted to farm. He lives by the lyrics to Dallas Davidson’s song “God Made a Farmer…” He gets up early and stays up late. He seeds, and feeds and weeds and breathes… bleeds, weans and rakes. He’ll spend his lifetime praying for rain and his prized possession is his good name…

After he graduated from high school, Jordan studied Ag Business/GPS at Hawkeye Community College. When he graduated in 2006, there wasn’t room for him to join the family’s farming operation because his dad was farming with an uncle. Jordan took a job at Carson&Barron Farms had been working there for nine years when one day in February 2013 it all changed.

That day Jordan’s dad, Craig, was admitted to the hospital for a pace maker. Jordan came home to feed the cattle and plant the crops. Then his former boss told him, “Family comes first. I will always be here to support you, but you need to go back home and farm now.” That’s when Jordan started transitioning into his family’s farming operation. Over the years, he’s taken on more day-to-day responsibilities.

“A farm will not work without a backbone to the operation, and my mom is ours. I don’t think we could ever replace her,” adds Jordan.

Judy has worked off the farm at Denton Castings for 25 years. She works on the farm after work. When Craig was in the hospital, Judy would get up at 2:00 or 3:00 AM to help check cows, fill the planter, or load trucks with soybeans or corn. 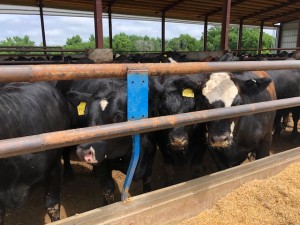 Jordan’s sister, Jackie, also has a passion for cattle. She and her husband have their own stock cattle, but she’s still involved with Albert Family Farms. She takes care of the cattle records, including vaccinations and rate of gain. She tracks which bulls are the most docile and which ones – Galvey, Simmental, Angus, Fleckvieh and the different crossbreds – create the most return on investment (ROI).

“Farming is about more than the money. Farming is a passion,” says Jordan. “You put the seed in the ground or see the little calf hit the ground, and it’s so rewarding to watch it grow and develop. When you pull that calf and watch it grow up, it’s the joy of life. You see that calf take its first breath, it’s a miracle.”

In addition to farming with his parents, Jordan is active in the Buchanan County Cattlemen’s Association. Each year group members hold an auction; funds raised support two $500 scholarships for high school 4-H and FFA members in Buchanan County. Then the two scholarship recipients help at the Cattlemen’s our food booth at the county fair. The cattlemen also grill at summer events, which Jordan says is as much fun as it is work. The grill outs help the cattlemen raise funds, as well as serves as a great way to promote beef.

The cattlemen also grill at summer events, which Jordan says is as much fun as it is work. The grill outs help the cattlemen raise funds, as well as serves as a great way to promote beef.

To help promote the high-quality beef he raises, today Jordan is sharing with us his tried and true recipe for Beef Brisket.