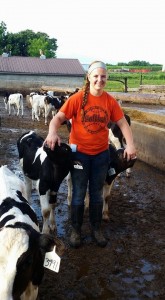 “Cow” was one of Shannon Hoyle’s first words, although she wasn’t raised on a farm. Her mother says she would look for cows everywhere and point them out whenever she spotted one. As she grew up, Shannon always sought opportunities to spend time with cows.

“When I was little, my favorite week of the year was county fair week. I would tag along with the Kadolph family, good family friends of ours, and spend the entire day at the fair. I loved every minute of it,” recalls Shannon, who voluntarily put in these hours helping the Kadolph family get ready for the fair.

After about two years of helping her friends with their bucket calves, Dan Kadolph convinced Shannon’s parents to let her buy her own calf that she could keep with theirs.

“The day I got my own calf was one of the best days ever!” says Shannon. “I showed bucket calves for a few years and then showed some steers for a couple years, too.”

Shannon’s career path took a detour during middle school. She opened enrolled to South Hamilton and the commute from Hubbard, combined with school and extracurricular activities, prevented her from spending time with cattle. In high school, she enjoyed government classes and decided to attend Iowa State University (ISU) as a political science major. 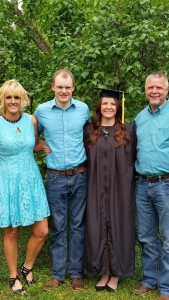 “While I enjoyed my classes, I wasn’t super passionate about my major. I also started to think about the job outlook with a degree in poli sci,” says Shannon. “Luckily, I was surrounded by a lot of great people, who gave me advice, and I made a lot of good friends my freshman year.”

During the middle of her freshman year, Shannon became aware of a major that allowed her to pursue agriculture and explore her interest in both agriculture and politics. One of her mom’s coworkers mentioned Public Service and Administration in Agriculture (PSA), which allows students to “pursue a career with agriculturally-related governmental and nonprofit agencies, or with businesses and industries that are concerned with public services in agriculture, natural resources or rural communities.”

Changing her major started a Domino-effect, and many pieces of Shannon’s ag career path fell into place. An email about the ISU Extension and Outreach Value-Added Ag Program caught Shannon’s attention during her sophomore year of college. She began working there as an intern. Today, Shannon holds a full-time position as a program assistant for Visit Iowa Farms, a program is administered by the Value-Added Agriculture Program of ISU Extension and Outreach. She works from the Borlaug Research Center in Nashua, but there’s more to this story… 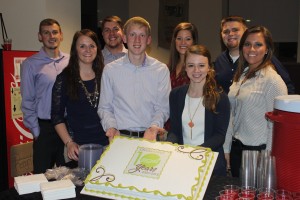 Also during her sophomore year, Shannon worked on a business development project through the ISU Agricultural Entrepreneurship Initiative (AgEI). She says that’s really when her dreams changed.

“I realized I wanted to be more involved in this program and minored in ag entrepreneurship. Kevin Kimlee, Carly Cummings and Stacey Noe were so helpful. I vividly remember telling them that I didn’t want to run my own business, but I believed an entrepreneurial mindset can be a competitive advantage in the workplace.”

What Shannon didn’t know then is how much entrepreneurial studies would shape her future and aspire new dreams. Those studies helped her recognize an opportunity to help make it happen.

“During my junior year of college, I started dating this really great guy who is a big part of my story,” adds Shannon. 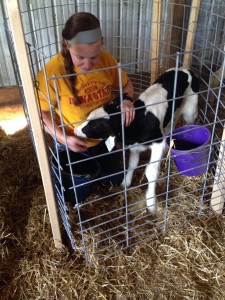 While they were in college, Shannon and her boyfriend, Drew Dietz, often talked about agriculture. The Dietz family feeds Holstein steers on their family farm in Northeast Iowa. In one of those conversations, Drew mentioned the many benefits of buying steers at a young age. This caught Shannon’s attention as she thought that maybe someday she could raise the calves their family fed out.

With her senior year drawing to a close, “someday” couldn’t come soon enough for Shannon. She put what she learned in college and on the job to work as she pursued her own dairy beef enterprise. Shannon’s parents were on-board immediately, knowing the passion she has had for cattle since she was a little girl. Shannon contacted friends and mentors to learn all she could about starting a business.

“Originally, I had the idea of buying huts and raising calves on pasture. I asked Drew’s parents if I could rent pasture from them, and I was really nervous for that conversation!” says Shannon.

The conversation with the Dietz family evolved. They knew the benefits of working directly with one producer, who could provide them with the feeder cattle they needed for their operation. 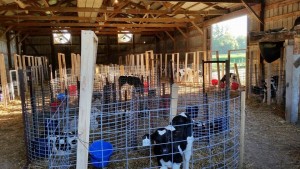 Knowing the vaccination protocol and feeding program of the calves that get fed out is advantageous, so the Dietz family decided to retrofit a 40×60 hay shed where Shannon could raise young calves. Shannon got her first group of day-old dairy bull calves in May 2016 has raised about 350 in the past year a half. She feeds groups of 50 calves in an all-in, all-out format from March through November. During the winter months, Shannon uses a different barn that can be heated for the baby calves.

Once the calves come in, Shannon follows a protocol that the local veterinarian helped her develop. For six to seven weeks, she feeds the calves milk twice daily. During this time, the calves also are introduced to starter grain and water. Once the calves are consuming four pounds of grain or more daily, they’re weaned from milk and moved into a different pen. They’re ready for the feedlot at 350 or 400 pounds, so the feeder calves are then sold to the Dietz family. 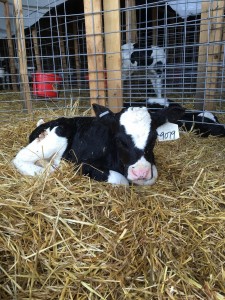 “I have one group of ‘babies’ and another group of ‘teenagers’ at the same time since they’re raised in different areas,” explains Shannon. “Baby calves require lots of time and attention. Because they’re born with no immunity, their health can change on a dime.”

“I’ve been blessed that my parents have been so supportive of my dreams. I wouldn’t be anywhere without the Dietz family either. They’re such innovative farmers, and they’re willing to teach me,” says Shannon, who appreciates all the people who have mentored her and helped her reach her dreams.

Shannon advises everyone interested in pursuing agricultural ventures to contact friends and family members. “For every successful person, there is someone who helped him or her get there. Find someone to be your mentor. Ask questions. Don’t be satisfied with the status quo.”