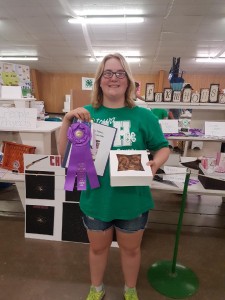 Success is sweet for Hope Hartman of the West Fork Winners 4-H Club in Sheffield, Iowa. Last year she entered a bar challenge at the Franklin County Fair and was named Best of Class. This year marks the second time in four years that her Food & Nutrition project has been selected to advance to the Iowa State Fair.

“My favorite things to make are cupcakes and cakes, so I wanted to try something new this year,” says Hope, whose Orange Muffins advanced to the state competition two years ago. Her grandma Cathy Carlson, of Cathy’s Country Cook’n and Carlson’s Tree Farm, is known for growing her own wheat and baking wonderful bread. Cathy is also known for making the most delicious 60-Minute Rolls, so Hope decided to try her hand with dough.

“My grandma found a Caramel Pecan Cinnamon Roll recipe she liked and has made it her own over years by adjusting ingredients,” says Hope. “The judge said the rolls smelled delicious and had good texture.”

Although Hope’s mom grew up in the kitchen and operated a bakery with Cathy, Hope says she didn’t “catch the baking bug” until she joined 4-H. 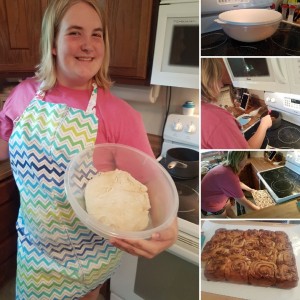 “I needed a project my first year of 4-H, so I decided to try baking,” says Hope. “I stuck with it after I realized I was good enough to get selected for state.”

Having a 4-H project get considered for the state fair is a huge honor and having a project get selected to actually advance to the Iowa State Fair can be highly motivational for youth.

“It’s really cool to see something you worked hard on get selected for the state fair,” says Emma Bartling. She’s participated in the Food & Nutrition 4-H Project for four years. This year her Buckeye Brownies earned a purple ribbon and were selected to advance to competition at the Iowa State Fair next month.

Like every good 4-H’er, this soon-to-be eighth grader started with a goal in mind. “I wanted to try a new dessert recipe that wasn’t like a traditional brownie. I also wanted to see if a box brownie mix and a homemade brownie mix would work the same in this recipe. She learned that a good homemade brownie recipe works just fine to replace a box mix brownie in this recipe.” 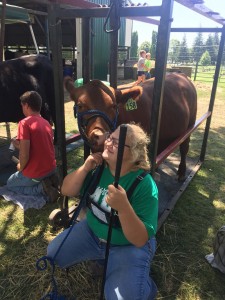 The combination of the layers and beautiful food photography made a Buckeye Brownies recipe stand out, says Emma. She recommends using a 9×13 cake pan instead of the 8×8 pan called for in the original recipe. The larger pan made it easier to cook the brownie base all the way through. She also prefers the larger pan because it makes thinner layers. Since this recipe is so rich, Emma says a thick piece would be too much at one sitting.

In addition to earning top honors with her Food & Nutrition project, Emma also earned purple ribbons for her bedroom redecoration and for a softball sign. One of her photography entries also was considered for state. She also earned blue and red ribbons with her photography project. She said she really didn’t care what the judge thought of her red ribbon photo entry because the memory of being in the field with her dad (when that photo was taken) is more important than any ribbon. Her real passion is working cattle with her dad.

It’s life lessons like these that help 4-H youth develop into confident, independent adults. Some of the best lessons are learned when the purple ribbon isn’t earned. Sometimes it’s just enough to discover where our interests lie. If you enjoy rich desserts, try your hand at baking Emma’s Buckeye Brownies!