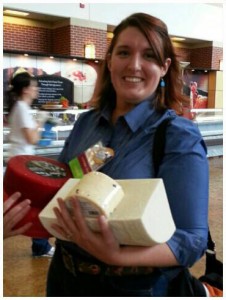 They call me Dairy Carrie. I love agriculture, in particular dairy cows, more than is normal. Hubs and I are working with his parents on their 100-cow dairy farm in the rolling hills of southern Wisconsin. I like beer but I love Rumchata. And fresh Wisconsin cheese. Friends call me a cheeseaholic… and I just might resemble that comment!

Carrie Mess is so passionate about agriculture that she has created an online persona for Dairy Carrie.  You can connect with her via Twitter (@DairyCarrie); like her on Facebook; and join her as she blogs about The Adventures of Dairy Carrie.

“Carrie’s blog is a dynamic blend of information and explanations of dairy practices plus hilarious, sincere and heartfelt stories about the things she loves most: cows, cheese, beer, and the farming life,” said Kelly Rivard.

I couldn’t agree more!  When following the Adventures of Dairy Carrie, you’re likely to end up with a smile on your face or doubled-over from laughing at some of her antics.  She provides a fresh voice for agriculture.  Just take a couple of minutes to watch her “Shocking Undercover Dairy Video” and you’ll see what I mean.  She also addresses burning questions non-farmers have like “Why are Dairy Cows so Skinny?” and “Is Chocolate Milk Made from Bloody Milk?”  (The title of this blog had me saying, “Eew.”  But, I had to read it and became educated about some non-farmers’ concerns about their milk supply.)

In honor of June Dairy Month, I thought about posting a list of top blogs by Dairy Carrie on TheFieldPosition.com.  Her obsession with RumChata would top my list, so I’ve decided to focus on that topic alone today.  After all, June 21st is the first day of summer.  Celebrating the Summer Solstice with RumChata seems to make perfect sense to me!  I hope you’ll agree.  Sit back and enjoy Dairy Carrie’s guest blog post today on RumChata…

After enjoying RumChata during a Christmas celebration with my family, I announced that I liked the drink so much that I would most likely name my first born child after it.  The next day I realized how silly that RumChata-induced statement was, mostly because kids aren’t on our radar.  However, the very next week I went to an auction and … 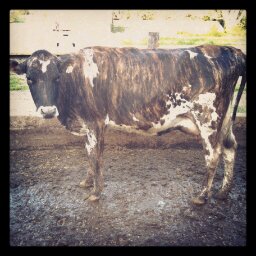 So why in the world would I name a cow after an adult beverage?  Because it really is that good and the best part is, RumChata’s creaminess comes from real dairy cream.  I love this new “You must be 21 or older” twist on getting my daily dairy intake.  In honor of June Dairy Month, I sent an email to the folks at RumChata and they were kind enough to give me the lowdown on this delicious dairy treat.

If you haven’t tried RumChata, I can best describe its taste as the milk leftover after a big bowl of Cinnamon Toast Crunch cereal – infused with rum. I highly recommend you, so long as you are of legal drinking age, go and get yourself a bottle.  Do it now, you can thank me later.  If you’re stuck sitting at work and can’t possibly get away until after 5:00, read my interview with Tom Maas, the founder and master blender at RumChata, then go.

When was RumChata launched? I had never heard of it before Christmas and now it seems like everyone has gone RumChata crazy!

In October 2009, we shipped the first cases in limited quantities.  Once we had RumChata in various markets, we personally worked in each market to get it noticed by bars and restaurants.  It’s now available in 49 states and from some Duty Free operators in the Caribbean.

One of the main ingredients to RumChata is cream that comes from Wisconsin dairy cows, which is awesome!  Do you buy the cream as an ingredient or is milk shipped directly to you?

We work with a very large commercial dairy in Neenah, Wisconsin.  They ensure that the rum and cream are perfectly homogenized together, so that the finished product is very stable.  This homgenization of dairy and alcohol allows the product to be kept without refrigeration.

In my mind, RumChata was developed by a rum-loving Wisconsin dairy farmer.  Any truth to that?

RumChata was created by a person with deep Wisconsin roots, who also has had a very long tenure in the liquor business. I (Tom Maas) worked on a dairy farm in Shawano County for several years when I was growing up.  After getting a degree from the University of Wisconsin, I started a 35 year career in the liquor business.  After retiring from Jim Beam in 2005, I created RumChata and put all of these years of experience to good use.

I like RumChata on the rocks and I love it blended with ice cream.  What’s your favorite way to drink Rumchata?

With fresh made espresso in two ways: sip a little with a cup of espresso or make a shot of espresso.  Chill it to room temperature and combine it over ice with 2 ounces of RumChata.  It’s the best tasting iced coffee you will ever drink! 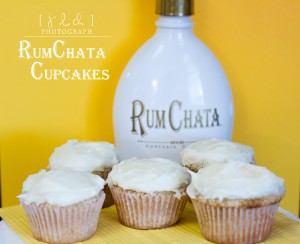 There are just so many ways to enjoy RumChata!  RumChata Cupcakes are among my faves.  French Toast is yummy, too.  But it’s hard to beat a good RumChata drink; click on these links to learn how to make Lemon Cake and Cinnamon Roll drinks.

If you’d like to celebrate June Dairy Month is more family-family, traditional way, try a Crustless Quiche or what I like to call “Not Egg Strata.”

Ingredients (these are only suggestions):

COOK’S TIP:  Let the “Not Egg Strata” cool down for a good 15 minutes before you dig in. This also tastes pretty great room temp and it reheats pretty well in the microwave later.