That Cup of Comfort Begins with a Seed 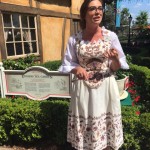 Leave it to Disney to make the tea making process magical!

The English Tea Garden is one of three featured tours during the 24th Annual Flower & Garden Festival at Epcot in Orlando. Other featured tours include the EPCOT® Gardens of the World and the Behind the Seeds Tour. (Yes, I’ve taken all three tours!)

Honestly, I felt a bit like Alice in Wonderland as I took in the beauty of the English gardens and was awed by all the interesting information. It was made more interesting because our tour guide was lovely young lady from England who is seven months into her year-long work study with Disney. Until she started working at Epcot, she had never tried herbal tea or pumpkin spice. Who knew those were so uniquely American? 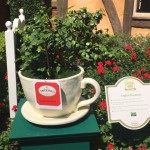 I had no idea how interesting tea can be! Below are four of the most fascinating facts that I learned while walking through the English tea garden plus a fifth fact that I gleaned online:

NOTE: There was no cost to this tour and we were treated to a complimentary glass of Iced Mint Tea at the conclusion. The English Tea Garden Tour at Epcot was perfect for someone like me who’s interested in food and beverages, gardening and history.

Steeped in History Nations have defined themselves by the tea trade and culturally by their tea ceremonies. The first cup of comfort was sipped approximately 5,000 years ago in Ancient China, and by the end of the third century tea had become China’s national drink. 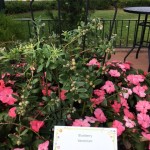 Early explorers traded tea in ports across the world. The Arabs had dominated the tea trade in China and the West until the Dutch set up their first trading port in Java and began shipping tea to Amsterdam. English merchants were quick to set up a company to rival the Dutch once Queen Catherine championed tea in her home country.

At that time, Thomas Twining (pronounced Twine-ing) was learning the tea trade by working for a wealthy merchant and handling some of the early tea shipments. He learned quickly and by 1706, at the age of 26, Twining purchased Tom’s Coffee House in London. Coffee houses are where men (never women) gathered to drink, gossip and conduct business. Twining differentiated his establishment by offering tea, as well as coffee. 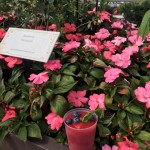 Because of shipping involved and an 118 percent tax rate, only the elite could afford tea. It took another 100 years before tea parties became fashionable, and the 7th Dutchess of Bedford was credited for creating “afternoon tea.” Three hundred years after its origins, more than 200 Twinings Teas are sold in 100 countries.

Our guide for the Twinings Tea Tour encouraged us to try to iced berry tea for a refreshing summertime brew. (Get recipe ideas here like Blueberry Vanilla Float Iced Tea). A recipe for Twinings Green Tea Berry Mint Julep was available from the Berry Basket, one of the new outdoor kitchens featured during the 24th Annual Flower & Garden Festival underway until May 31 at Epcot. With the Run for the Roses coming up this Saturday, this recipe is most fitting.

NOTE: You can make a frozen version by blending all ingredients with ice until it reaches desired consistency. You can make an “adult version” by adding 1.25 ounces of Kentucky Bourbon.