Every farmer can remember the excitement of Christmas morning. The rush of running to the living room and unwrapping a shiny new model tractor with a matching gravity box or the classic old-fashion wood barn complete with fences and plastic cows.

The truth is the excitement never really fades. Farmers’ toys just get bigger and the technology becomes a tad more tantalizing.

In recent years, unmanned aerial vehicles (UAVs), commonly called “drones,” have literally taken off as one of these new toys. But within this high-flying tech lies an opportunity for farmers to improve profitability.

“It’s not going to fix a problem immediately, but drones can help you make adjustments next season,” says Phil Pitzenberger, Iowa Soybean Association (ISA) farmer-member from Greene. “For me, it’s been identifying management changes for the future — that’s been the biggest value.”

Pitzenberger has always been fascinated by technology. When drones came on the agriculture scene, it was natural he’d find a way to incorporate them into his corn-soybean and custom spraying operation.

“When I first got started, I knew I was just going to be flying it over fields looking for problem areas,” says Pitzenberger. “I wasn’t sure what it was going to show me, but the results came  really quick.”

Pitzenberger noticed patterns perpendicular to his corn rows. The birds-eye view revealed an aerial fungicide application was poorly done, covering only 50 percent of the field.

“When it came to harvest I watched the yield monitor just to compare — it was like driving through waves,” Pitzenberger says. “I learned I need to improve how I apply fungicide.”

As a result, Pitzenberger and his family bought a Hagie, which also turned into a custom spraying business. He laughs saying, “It’s funny, but I trace it all back to that one look from  the drone.”

“Once I was up in the air, it was easy to tell but from the road you couldn’t make rhyme or reason out of it,” he adds.

“I always tell farmers Mother Nature rarely works in patterns,” Bogaards says. “One of the first times I flew a drone, I noticed patterns in my fields and from the drones I couldn’t tell what it was. So I started walking through my field and realized it was a nitrogen issue.”

Earlier that spring, Bogaards had applied anhydrous at a ten-degree angle to his intended corn rows. The drone revealed a pattern of varying plant sizes and stages of root development across the field. Seeds planted at the intersection of the row and the knifed-in nitrogen application were much healthier than those planted between the rows, which were as much as 15 inches away.

The next planting season, Bogaards offset his nitrogen application 5 inches and ran parallel with the rows using GPS — a small change that payed dividends  at harvest.

“It makes a big difference in evaluating and understanding the problems in your fields,” Bogaards says. You’re going to see a different view of your field and be able to ask questions on how to improve.

Getting Started with Drones

Both Bogaards and Pitzenberger insist getting started with drones is not as difficult as farmers think. In most cases, it just takes trying it out.

“It’s really about getting your hands on the equipment,” Bogaards says. “Drones three years ago were easy to fly — today, they’re even easier.”

Bogaards has been flying for four years. He now serves as a drone coach and consultant for farmers, and dealer for FlyingAg, a drone service and retailing company.

“Most guys starting out just want to have something that’s easy to get out and up in the air to take a few pictures,” Bogaards says. “That’s a great place to start. Then after you get really comfortable with the controls and maneuverability, start looking at the more advanced things you can do.”

“We’re just beginning to see what we’re going to be able to do with these things,” Pitzenberger says. “They’re already telling us a lot of information but I can’t even imagine what’s going to come over the next  10 or 20 years. 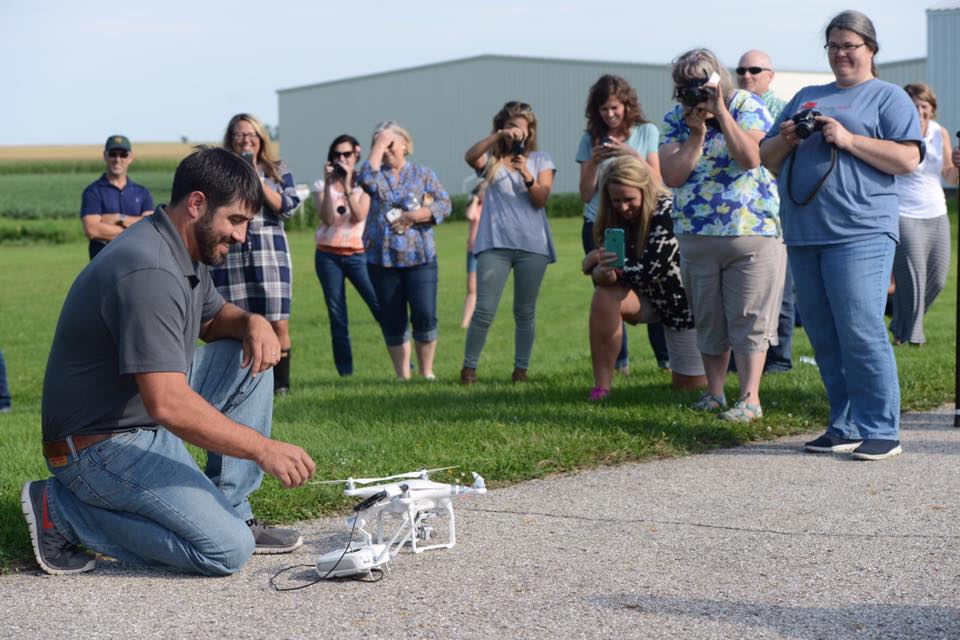