How Civilized is a Society that Shuts Down?

“Musings of a Pig Farmer” by Larry Sailer

It’s a good thing farmers can’t shut down. If they stopped milking the cows or feeding the pigs and chickens for a day, it would cause more havoc than any shutdown Obama can dream up, writes Randall Reeder, Reeder & Associates LLC, in his “Weekly Comments.”  Reeder goes on to say, “Milking Cows are more essential than parts of government.”

I couldn’t agree more with Reeder, but it appears the Obama Administration has a much different opinion of what are essential parts of government.  Apparently, it’s in the best interest of national security to secure the World War II Memorial, which has no gates, no doors and no way of closing – until are wise government leaders (insert sarcasm here) installed barricades.  This attraction was hardly manned before the shutdown, but now there are barricades and guards!

Likewise, it wasn’t enough for the U.S government to close the doors to Mount Rushmore.  When the Feds realized people could still see it from a nearby road, they blocked off part of that road.  (Perhaps our government leaders thought, “Out of sight, out of mind.”  They certainly wouldn’t want American citizens to remember these great presidents and ponder why the U.S. was never close to a mess of this magnitude during their administrations!)

Reeder had a brilliant idea (IMHO)… invite President Obama and his Cabinet to the Capitol for a joint session of Congress. Then block all the exits, and don’t let anyone out until they agree on something.  Once they get this government shutdown resolved, they’ve can tackle the debt ceiling.

Throughout history, government – or organized leadership of some type– has been necessary for a civilized society.  I’m beginning to wonder just how civilized our society is.  Just think about how the government shutdown thinks about things we take for granted. 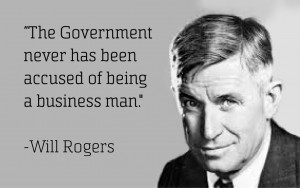 For example, is the Tomb of The Unknown Soldier still being guarded 24/7?  I heard that Amber Alerts cannot be sent at this time.  The USDA website has been shut down because U.S. Secretary of Vilsack says they can’t afford to keep it secure.  Does it really cost anything for this information to be on the web or is this merely a tactic to show us who’s the boss here?  I can’t say the shutdown of the USDA site has even affected me, but I have noticed its effect on ag education teachers.  Teachers will work around this bump in the road, but it’s just infuriating to know politicians are playing games with our kids’ education!

What will happen with commodity markets during the government shutdown?  Some folks I’ve visited with believe the markets will not function properly without all the information our government collects. I’m positive markets will not function the same because yesterday it seemed that analysts were trying to digest other information provided by private reports and the media.

Let’s hope we can find a solution soon because Obama’s “all or nothing” mentality will not cut it!  (Play on words intended.)  People are different with different needs.  Government cannot give everything to everyone.  The government can’t continue printing money and expect this country to continue!  Tax dollars come from people, not the government. Someone must pay those tax dollars by producing something.