Tips for Controlling Palmer Amaranth Across the Upper Midwest 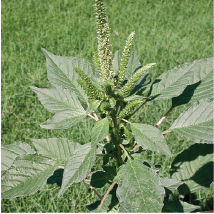 Palmer Amaranth, called Palmer Pigweed, has been confirmed in 48 of Iowa’s 99 counties. When Bob Hartzler of Iowa State University Extension made this frightening announcement during a recent crop meeting that I attended in Ames, the atmosphere in the room changed — and for good reason.

To say this weed is “aggressive” is an understatement. To win the battle, farmers must employ an aggressive weed management system. It’s important to start with a clean seedbed, and then integrate more than one herbicide to prevent weed escapes by:

Every attempt must be made to completely eradicate it from fields, as Palmer Amaranth is truly “waterhemp on steroids.” Palmer is closely related­­­ to Common Waterhemp but is much more invasive. It can get so bad that literally entire fields must be tilled up to prevent further infestations.

Both Palmar Amaranth and common Waterhemp are dioecious, meaning there are male and female plants, as opposed to most other pigweeds species that have male and female parts on the same plant. Many scientists believe this characteristic gives these weeds an advantage to developing herbicide resistance.

Both Palmer Amaranth and Waterhemp have become resistant to numerous herbicide groups. Many populations are resistant to multiple groups — as many as five in one population has been documented in Illinois!

Pollen spreading within fields and to neighboring fields spreads that resistance, so farmers must be even more diligent to control weeds in both corn and soybeans. Diversity of weed control tactics key. We won’t be able to rely on just Roundup Ready 2 Xtend®, Enlist™ or Balance™ GT — nor any other future trait system.

Take some time now to attend some weed control meetings in your area, and learn how to identify and manage this potentially devastating pest.