Go “Behind the Curtain” with this North Iowa FarmHer 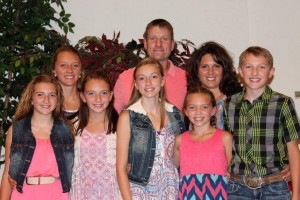 You see her running kids to appointments. You see her cheering them on in the stands during football and basketball games, as well as at track meets. What you don’t see is that before breakfast she spent 90 minutes in the pig barns. Then she’s back in the house by 6:30 a.m. to feed her kids and to make sure they have what they need before boarding the bus at 7:30 a.m. Once her kids are on their way to school, she returns to the farrowing houses.

Meet Janel Weaver, a mother of six and a FarmHer from Dougherty, Iowa. She wasn’t raised on a farm but she’s been farming ever since she married her husband, Cory, in 1997. Although it’s not the career path Janel had envisioned, she can’t imagine doing anything else. 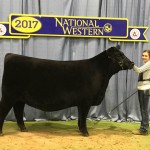 “When Cory and I were dating, I’d spend hours riding in the tractor with him. In fact, our first date was in the tractor. He showed livestock, so I spent time at the fair with him,” says Janel. “We got married after I graduated from NIACC (North Iowa Community College). I had planned to get a four-year degree and teach, but I found plenty to do on the farm. Back then, we had all these farrowing units and no hired help but we had each other.”

Fast forward 20 years and Janel and Cory still work together in their farrow-to-wean operation. They leave the house together in the morning and they come home together. While Janel spends time in the farrowing barns, Cory focuses on breeding and artificial insemination. Sows are bred every day, and sows farrow every day – 365 days of the year. They wean pigs twice each week at 5 a.m. 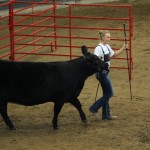 “Cory and I make a good team. I know I’m good at farrowing because it’s something I do every day,” says Janel. “Because it’s such a male-dominated field, I believe women in agriculture must be good at what they do. They must be confident and they can’t be afraid to express their opinions. Women see things from a different perspective, so having both men and women involved in an operation is helpful.”

In addition to producing pork, Cory raises row crops and cattle with his parents and two brothers. Janel also takes care of payroll for the couple’s employees, as well as takes care of all the farm records.

“I love working with my family, and I love the flexibility of my job,” says Janel. “I get to be with my kids in the morning before they leave for school. I’m home when they get off the bus. I can attend their games, and I get to be with them in the summer. If I’m not in the house when they need me, I’m just a call away. They’ve learned to be self-sufficient. They have a great work ethic, and their animal projects have helped them develop confidence.” 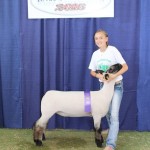 Kenna picture with her purple ribbon at the Iowa State Fair.

All the Weaver children have daily chores and show stock to care for. Their oldest daughter, 19-year-old Cailey, is a member of the NIACC track team. She’s also still very much involved with helping on the family’s farm. Before she graduated high school last May,

Cailey was drawn to the show ring with her 4-H cattle project. A member of the Shifting Gears 4-H Club, of which her dad serves as leader along with retired FFA Advisor Dean Weber, Cailey showed at the North Iowa Fair, Iowa Beef Expo and the Denver Stock Show.

This year Cory returned to Denver for the stock show and to Des Moines for Beef Expo with their 13-year-old daughter Mycah. She  made the championship drive in showmanship at the 2017 Iowa Beef Expo and took fourth overall. 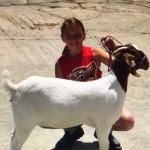 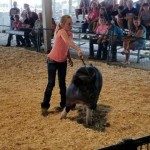 animals know how to lead, walk and set up. Our kids wash their animals regularly, as well as do chores daily. It takes a lot of time,” says Janel. “When they win or place in a class, that recognition has been earned.”

McKenna, 16, felt more comfortable with lambs than cattle. She has had a 4-H sheep project for six years. She enjoys showing at both the county and state fairs. Like her older sister, 11-year-old Ellie wasn’t sold on showing cattle. Last year she began her 4-H Boer goat project, and her first doe gave birth Feb. 9 to a beautiful buckling.

Cail, 14, also tried showing cattle but was more passionate about pigs. He’s had a 4-H swine project for five years. He also enjoys showing at the county and state fairs. Ten-year-old Leah looks up to her big brother. As a first year 4-H member, she’s going to try her hand at showing pigs this summer at the county fair. 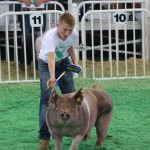 “Their animals are their responsibility. Because each of our kids is involved in sports and extracurricular activities, they help each other to cover their chores,” says Janel. “Cory grew up showing livestock, so he’s especially proud that our kids have taken an interest in showing. Attending shows together has become our family’s vacation. Not only do we really enjoy the family time, but we’ve met a lot of great people along the way.”