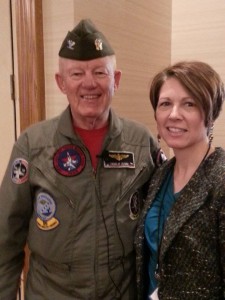 When Captain Charlie Plumb took the stage yesterday for the opening general session of the Independent Professional Seed Association 25th Annual Conference in St. Louis, the only noise in the room was the sound of a soldier’s footsteps in the dark.  When he began to speak, you could have heard a pin drop.

“Today I want to take you back to a Prisoner of War camp in Vietnam where you can feel the intense heat baking on the tin roof of your 8 by 8 cell,” said the man, who lived as a POW from ages 24 to 30.  Just five days before his tour of duty was to end, he was shot down and spent the next 2,103 days in a prison.  “It’s important that you get a vivid mental picture. Try your best to smell the stench in the bucket I called my toilet, and taste the salt in the corners of my mouth from my sweat, my tears and my blood.

If I am effective in these few moments we spend together today, you’ll see that the same kind of challenges you face, are the same basic challenges I faced in a prison cell: feelings of fear, loneliness, failure and a breakdown of communication. More importantly, your response to those challenges will be the same response I had to have in the prison camp just to survive.”

“Even though I’m telling a story about myself, the real story is not about me,” he continued. “It’s about you… You won’t face the 8-foot walls that I did, but you will encounter the 8-inch ones.  Those eight inches between your ears can become your biggest barrier.  That’s why it’s important to remember that you can do anything you set your mind on.”

Captain Plumb went on to tell the room full of independent seed company executives how honored he was to be with us because, as the son of a Kansas farmer, he knows we’re the first link in the chain that produces the world’s safest and most abundant food supply.

If you blame others for your problems, Captain Plumb says you’re giving them control over you– and your life.  He shared tips on he prevented the enemy from having total control over him inside the POW Camp and made them relevant to our lives as civilians:

Life is about taking choices, taking risks.  Captain Plumb’s time in the POW camp taught him that sometimes the solution is take another risk.  “The last thing you want to do is get further outside your comfort zone, to get into deeper water, to hurt more,” he’s quoted as saying in a Juneau Empire article.  “The human response is to fall back and seek safety.”

Captain Plumb said he learned in that POW camp that he could still control his attitude.  He could choose to laugh or to cry; he could choose to be positive or negative… but choosing to be negative gave the enemy control over his destiny.

We can all chose to make a positive difference, whether we make a living as a farmer or a seed company owner.  We’re Americans and we enjoy the freedom of independence! 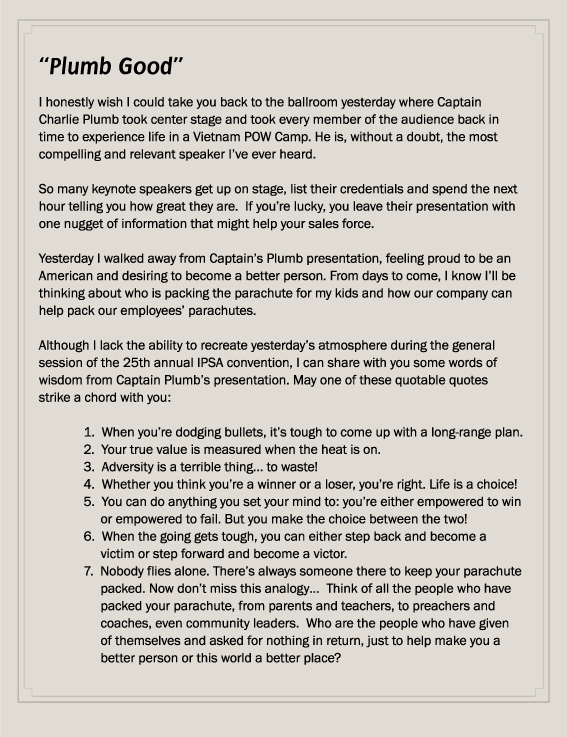